Impacts on the Arab World

Registration for the Zoom-Webinar: fanizadeh@remove-this.vidc.org.
You will receive the data for the Zoom Webinar in the morning of 23 November 2020 and after personal registration. 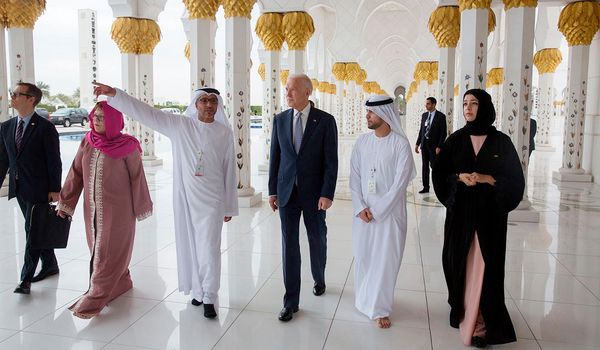 The US elections on the 3rd of November also determined future strategic guidelines of US-foreign policy. As a global power, the Arab world is of fundamental importance for the US ever since the end of the Second World War.The past administration under Donald Trump was no exception to this rule. By systematically escalating the dynamics of confrontation with Iran, the continuation of the military intervention in Syria or the recognition of occupied territories such as East Jerusalem and the Golan Heights, the Trump administration tried to further enshrine strategic baselines in the Arab world. The contrast with previous US foreign policy is particularly clear in questions of the recognition of territories occupied by Israel according to UN Security Council resolutions. Represented as war on terror, old alliances around Israel and Saudi Arabia should be adapted to a changing global and regional environment.

Given the deep societal, economic and social crisis the US is facing, the question arises what these fault lines of US-American policies in the Arab world will include in the future. How has the new administration to change strategic guidelines in light of an increasing multipolarity of world politics? What does an empire in crisis imply for the Arab region?

Over the last years, millions of people went to the streets in countries such as Lebanon, Iraq or Sudan to claim their fundamental rights. These revolts have challenged the different regimes and, hence, fundamentally questioned existing political, social, and economic power relations in the region. How are these protests linked to US-foreign policy in the region? Which political perspectives have the revolts developed? In which way do these social movements undermine the US policy of normalisation between Arab regimes and Israel? How does the war in Syria still shape the protests?

By focussing on a regional perspective with particular references to the developments in Palestine, Syria, Lebanon, and Egypt, these questions will extensively be discussed at our online event.

is an associate professor of economics at Hampshire College and research associate at the Political Economy Research Institute, University of Massachusetts Amherst. He has published in academic outlets such as the Journal of Development Economics, Applied Economics, Southern Economic Journal, Political Geography, Middle East Report, Forced Migration Review, and Critical Studies on Security. His last book was South-South Trade and Finance in the 21st Century: Rise of the South or a Second Great Divergence (co-authored with Firat Demir). Dahi serves as a co-editor of e-zine Jadaliyya, has served on the editorial collective of Middle East Report and is a founding member of the Beirut School of Critical Security Studies working group at the Arab Council for the Social Sciences (ACSS). Dahi is also the co-founder and director of Security in Context , an initiative that promotes critical research and policy analysis around key questions related to peace and conflict, political economy, development, the politics of in/security and militarism, particularly as they intersect with issues related to emerging technologies, mobility, infrastructure, climate change and geopolitics.

teaches in the Department of Development Studies at SOAS, University of London, with a research focus on the political economy of the Middle East. His most recent book is Money, Markets, and Monarchies: The Gulf Cooperation Council and the Political Economy of the Contemporary Middle East (Cambridge University Press, 2018), which was awarded the 2019 British International Studies Association, International Political Economy Group Book Prize.

is Associate Professor of Political Science at the American University in Cairo.  She earned her PhD from McGill University in Montreal, where she wrote her dissertation on the impact of neo-liberal economic reconstruction on changing patterns of state-civil society relations in Egypt and Bolivia. Her field of specialization is comparative political economy and development, with a focus on Latin America and the Middle East. El Mahdi’s research interests cover the areas of state-society relations, social movements and resistance. Before joining AUC, she worked for several developmental organizations, including NGOs and UN agencies. She is also an activist with a number of opposition groups of the Egyptian Left. El-Mahdi is a frequent commentator on AJE, BBC, CNN, ABC and writes op-eds for both Egyptian and international newspapers.

is an Assistant Professor of Sociology at the Sociology, Anthropology and Media Studies Department at the American University of Beirut (AUB). As a political sociologist, her work focuses on the fields of social inequality, social movements, social identities, sectarianism, conflict and violence.
Majed has completed her PhD at the University of Oxford where she conducted her research on the relationship between structural changes, social mobilization, and sectarianism in Lebanon. Prior to that, she has worked as a Program Assistant and a Senior Researcher at the United Nations Development Program – Arab States Bureau. She is the author of numerous articles and op-eds. Her work has appeared in Mobilization, Global Change, Peace & Security, Routledge Handbook on the Politics of the Middle East, Global Dialogue, Idafat: The Arab Journal of Sociology, Al Jumhuriya, and Al Jazeera English.

is a social scientist, researcher and senior lecturer at the Department of Development Studies at the University of Vienna, as well as a consultant to the VIDC Global Dialogue. His main areas of research are development policies in war zones, the antagonism between Israel and Palestine, movements of political Islam in the Arab world, critical state theories and postcolonial theory formation. Currently, he serves as the project coordinator of KnowWar (Knowledge Production in Times of Flight and War – Developing Common Grounds for Research in/on Syria, see www.know-war.net/), a collaboration between the Syrian Center for Policy Research, Mousawat, Birzeit University, the University of Klagenfurt, and the University of Vienna.