Afghan women are urging for their inclusion in the peace process

Afghan-Austrian journalist Tanya Kayhan attended the Women Leaders' Peace Summit and compiled video reports from the Summit and the Geneva Conference on Afghanistan for VIDC.

is a PhD student at the Department for Migration and Globalization at the Danube University Krems. Ahmad works as a consultant for the VIDC since 2015.

works at VIDC Global Dialogue, responsible for Migration & Development with a regional focus on the Middle East. 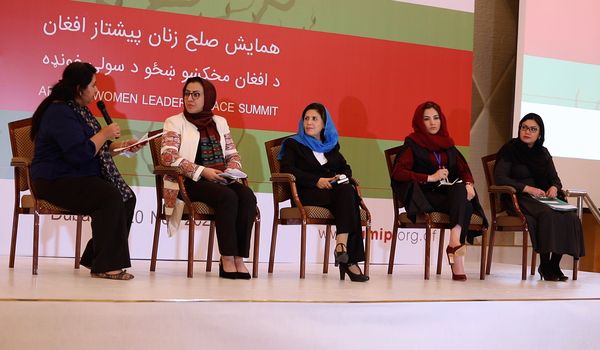 From Ali Ahmad and Michael Fanizadeh

While the peace talks between the Afghan government and the Taliban gained momentum in early December, two important conferences for the future in Afghanistan took place in November. One was the Afghan Women Leaders' Peace Summit 2020 in Dubai, where Afghan women stressed that they wanted to be included in the negotiations and were not willing to give up their rights in order to achieve peace.  Secondly, the International Donors' Conference for Afghanistan, held in Geneva from 23-24 November 2020, which also talked a lot about the rights of women, children and minorities, but was mainly about pledges for new aid money amounting to 3.3 billion US dollars annually.

The summit was jointly organized by the Afghan Women’s Network (AWN) and the Afghanistan Mechanism for Inclusive Peace (AMIP) to discuss the importance of women’s participation during the entire peace process. The Afghan women participating in the summit were deeply concerned over the lack of female representation during the peace talks and the increase in violence since the peace deal was signed between the U.S. administration and the Taliban on the 29th of February in Doha to end the Afghan war. The Afghan women emphasized how they were not willing to give up their rights in order to achieve peace.

Mary Akrami, the co-organizer of the summit from AWN said during an interview with the Vienna Institute for International Dialogue and Cooperation (VIDC) that the women of Afghanistan had three main demands from the Taliban and the Afghan government peace negotiators: First, both parties to the conflict must resort to a countrywide ceasefire. Second, the peace process should be more inclusive by bringing minority groups, victims of war and women into the process. Akrami, however, emphasized that women should not be included as victims, but rather as important role-players during the ongoing peace talks. Third, the protection for the women rights’ activists across Afghanistan must be guaranteed, stated Akrami.

Afghanistan’s State Minister for Human Rights and International Relations, Sima Samar who attended the women’s conference in Dubai was concerned that the Afghan women might lose some of the rights they have gained since the US-led forces ousted the Taliban from power after the 9/11 attacks. She said to the VIDC that having more women in the negotiating team will put a lot of pressure on the Taliban to realize the actual realities of her country.

According to Afghanistan’s Ministry of Refugees and Repatriation (MoRR), nearly 700,000 Afghans live across Europe with Germany hosting the most Afghans, totaling 257,110. A dozen Afghan women from the diaspora had also attended the summit to share their expertise and knowledge with other Afghan women.

The participants of the summit agreed on several key topics, which include an immediate ceasefire, the inclusion of Afghan women and civil society during the peace talks, and the role of neighboring countries who have influence on the Taliban, being among the most important. They released their demands as a declaration at the end of the summit on the 21st of November. The final document also states that conducting peace talks outside Afghanistan fuels concerns about accessibility, transparency and the accountability of the process.

The declaration demands that at least 30% of negotiating teams from both sides should be women and that women should be represented at all levels of peace process and the post-agreement development. Currently, out of the 21 members of the Afghan government delegation, there are only four women whereas there are no women in the Taliban delegation. The Taliban insurgents had banned women from public life when they ruled Afghanistan between 1996 and 2001 which explains why there are no women represented in their delegation.

An immediate, viable and stable ceasefire with both sides of the conflict showing a firm public commitment was among the demands of the Afghan women, as stated in the declaration. The women reiterated that the release of more than 5,000 Taliban prisoners, who were accused of war crimes by the Afghan government, did not deliver a ceasefire. On the contrary, it undermined justice and the rule of law and legitimized the Taliban’s acts of terror. In the presence of continued attacks by both sides, people lost confidence in the peace process, the declaration reads. If a ceasefire was agreed upon, the women will ask countries with influence on both parties to allow women, victims of war and civil society to monitor and make sure it is upheld.

The declaration stated that the peace negotiations must guarantee the constitutional rights and values and civil liberties including freedom of speech and media. Along with preserving the achievements of the last 19 years, the victims of war should be included during the peace process in order to avoid revenge and help the healing and recovery process.

The Afghanistan Conference 2020 was a donor conference co-hosted by the governments of Afghanistan and Finland with the United Nations and held on 23-24 November 2020. Donors pledged at least US$ 3.3 billion for the first year of the upcoming four-year period, with annual pledges expected to remain at the same level.

As the largest donor, the European Union has pledged to provide € 1.2 billion in emergency and longer-term assistance over the period 2021-2025. EU High Representative for Foreign Affairs and Security Policy Josep Borrell told the opening session of the conference: “With intra-Afghan peace negotiations having started, but terrible violence still causing great suffering for the Afghan people, Afghanistan is at a crossroads. The Afghan people can count on the European Union's support for a prosperous and peaceful future for their country, but our support relies on democracy, human rights, and social progress being protected.”

Austria also emphasises its willingness to continue financial support for Afghanistan, according to the Secretary General at the Foreign Ministry, Peter Launsky-Tiefenthal: “Since the last Brussels Conference on Afghanistan (2016), Austria´s bilateral support to Afghanistan amounted to more than 10 million EUR. This support was provided mainly in cooperation with international organizations in order to improve living conditions and build perspectives for the people in Afghanistan, in particular women and children. Austria is committed to continue its contribution in this vein.

While Afghan women were in Dubai discussing the reduction in violence and the inclusion of women in the peace process, Pakistan’s Prime Minister Imran Khan visited Kabul on the 19th of November for the first time to vow his country’s commitment to the Afghan peace talks. Khan assured the Afghan government that Pakistan will do everything it can to reduce violence in Afghanistan.

“If you feel there is somewhere Pakistan can help with, please let us know. We assure you that we will do everything and whatever is within our reach,” said Imran Khan during a joint press conference in Kabul with Afghan President, Ashraf Ghani.

On the 12th of September, the Afghan government delegation and Taliban negotiators kicked off their first face-to-face meeting in Doha, but could only reach an agreement on the  rules and procedures of the negotiations nearly three months later, on the 2nd of December at last. The actual peace talks are yet to start in order to end the war in Afghanistan.

Meanwhile, members of Afghanistan’s newly established High Council for National Reconciliation met for the first time on the 5th of December in Kabul to discuss the roadmap to achieve peace. The U.S. Special Representative for Afghanistan’s reconciliation, Zalmay Khalilzad welcomed the formation of the Council. He wrote in a twitter post that this Council would negotiate the terms of the peace agreement, power-sharing and a permanent and comprehensive ceasefire with the Taliban.

“The Afghan people have been yearning for peace. The steps taken in recent days are positive and hopeful. I urge both sides to accelerate their peace efforts to end the country’s long war,” Khalilzad tweeted.