Tax justice and gender in the face of COVID-19

Othim, Caroline and Roos Saalbrink (4 June 2020) In depth: Why fair taxation matters in wake of this pandemic

Porobić Isaković, Neal / Women's International League for Peace and Freedom (WILPF) (23 March 2020) What has COVID-19 Taught Us about Neoliberalism?

NGO Working Group on Women, Peace and Security The Gendered Impact of COVID-19

Caroline Othim is the Global Alliance for Tax Justice (GATJ) lead on tax and gender, leading the global campaign on “Tax Justice for Women's Rights.” Othim specializes in gender analyses and using creative strategies to connect local issues with larger movements for change and active citizenship. She is passionate about fiscal and gender justice and is committed to promoting policy changes by harnessing the power of collective mobilization. 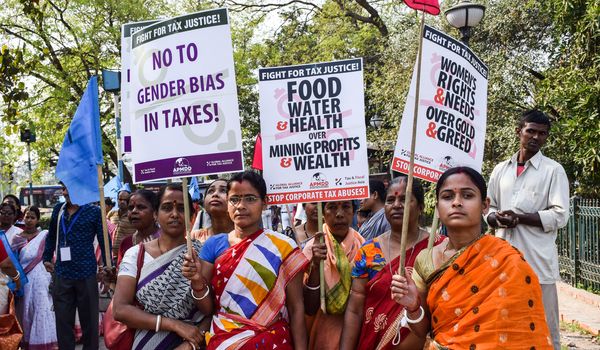 Covid-19 is revealing and exacerbating gender and economic inequalities. The entire world is going through an extraordinary emergency. The last time the world faced a disease of such rapid and dire impact as Covid-19, was a century ago when an influenza pandemic claimed tens of millions of lives. As the pandemic sweeps through the nations of the world, all countries at all levels of development have been impacted and the disease is exacerbating systemic inequalities in the current social and economic systems. Every single citizen of the world stands threatened by COVID-19 but women at the intersections of inequalities of gender, race, age, sexual orientation, disability and socioeconomic status are disproportionately bearing the brunt. This is due to decades of privatisation and austerity measures promoted by capitalist policies and patriarchal systems of oppression resulting in underfunding of social sectors including health and education systems, weak governance, rapid increases in public debt and large infrastructure deficits. The crisis has also exacerbated the weak monetary and fiscal systems in developing countries, which have a limited fiscal capacity to respond. The reduced economic activities as a result of the loss of export earnings and commodity price collapses has seen a decline in tax revenues. This is the result of trade liberalisation which has reshaped economies and relegated developing countries to mainly producing and exporting primary commodities and importing manufactured goods and now impacted by the drop in the price of commodities.

What COVID-19 revealed on Gender and Tax Justice

Tax justice means that taxes are fairly raised and fairly spent. Yet, the current neoliberal system continues to entrench a broken international financial architecture that enables illicit financial flows, tax evasion and avoidance by the rich and multinational corporations (MNCs). This broken tax system allows MNCs to minimise their taxation by shifting their profits to offshore tax havens. The report of the High-Level Panel on Illicit Financial Flows from Africa estimated that the continent is deprived of US$50 billion per year due to illicit financial flows. At the global level, UNCTAD has estimated that one type of corporate tax avoidance alone is costing developing countries around US$100 billion per year, and thus the total loss can be assumed to be significantly higher. This has resulted in severely undermining the capacity of states to generate domestic resources required to invest in public services. When public services are starved of funding, and when taxes aren’t fairly collected and spent, it is women and girls living in poverty who pay the highest price. Poverty is sexist and so is the distribution of extreme wealth. Globally 9 out of 10 billionaires are men. Transferring and redistributing wealth through taxation has the potential to tackle systemic discrimination.