How countries in the Global South can still benefit

VIDC Policy Brief and letter to the Austrian finance minister

Letter to the Austrian finance minister on the OECD draft proposal (Oct. 2021) 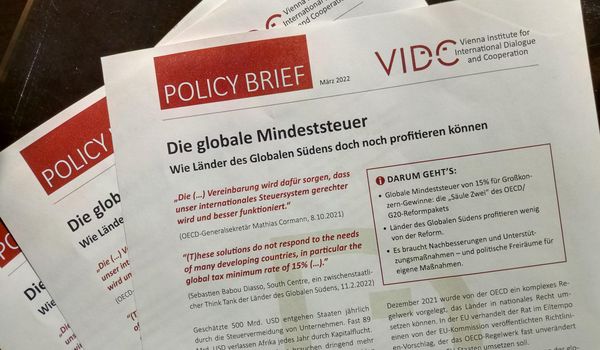 International tax policies have a major impact on countries of the Global South, especially in the area of corporate taxes, as these taxes account for a higher share of total tax revenue in poorer countries, compared to OECD countries. Countries of the Global South have large financial needs and therefore should also benefit from the reforms of the international tax system, so that they are able to increase their revenues.

On 8 October 2021, the so-called Inclusive Framework of the OECD/G20 presented the concept for a global minimum tax, and on 20 December 2021, the OECD presented its model rules. Only two days later, the EU Commission published a proposal for an EU Directive that will implement the OECD rules (with minor amendments) in a binding manner within the EU. Currently (April 2022), the ECOFIN is discussing a compromise proposal by the French EU Presidency.

The VIDC has analysed the global minimum tax in a policy paper and developed recommendations. We are particularly concerned with the possible impact of the reforms on countries of the Global South.

In a joint letter to the Austrian Finance Minister Magnus Brunner, the VIDC as well as the AG Globale Verantwortung (a network of 35 Austrian development  NGOs) expressed the fear that particularly poorer countries of the Global South, mostl of them so-called source countries, will benefit little from the Global Minimum Tax. Similar letters were sent to the the Austrian Foreign Ministry as well as Austrian and EU Members of Parliament, and other stakeholders.

A matter of concern is the Global Minimum Tax rate of 15%, which is 10% below the average corporate tax rate of countries of the Global South. Moreover,  harmful tax competition between countries will not be sufficiently curbed, due to concessions to low- and zero-tax countries.

Out of 46 least developed countries, 35 and out of 54 African countries, 28 are not part of the OECD agreement. Nigeria, Kenya, Pakistan and Sri Lanka do not want to be part of the reforms, although they were actively involved in the OECD negotiations. It is important for the poorest countries of the Global South to weigh costs and benefits of the OECD framework and freely decide whether they want to go along with it or not. In doing so, they should not be exposed to international political pressure.