The Renewal of the Palestinian Movement

The Renewal of the Palestinian Movement

A Transnational Unity from Below?

You will receive the data for the Zoom Webinar in the morning of 28 October 2021 and after personal registration: seewald@remove-this.vidc.org 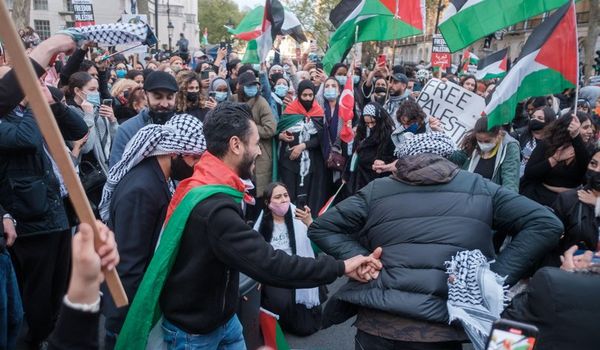 The event deals with the current protest movement in Palestine and explores the question as to whether it represents a new unity from below. To what extent has the struggle of Palestinian communities against the Israeli occupying power gained momentum, particularly in the last few months? What challenges and difficulties do activists of this new movement face? How does this relate to the large Palestinian mass organisations such as Fatah and Hamas? What do these developments mean, and for whom, in both the medium and long term?

With the recent war in May 2021, it once again became clear to what extent the political coordinates of the Oslo process from the 1990s are now obsolete. The gap between international rhetorical commitments to regulate the so-called conflict and realities on the ground can no longer be hidden. The mass Palestinian protests inside Israel, in the occupied territories, as well as in Arab countries during the recent war, have once again made this gap visible.
At the same time, the current protest movement seems to be developing something else: the idea of a unity of Palestinian society, despite their different localities, different living conditions and Israeli mechanisms of control and dominance. The Oslo process codified the fragmentation of the Palestinian society institutionally, politically and socially - the West Bank as the fragmented power base of the Palestinian Authority, separated from it the Gaza Strip and East Jerusalem, the Palestinian population in Israel is isolated from all of them, not to mention Palestinian refugees in neighbouring Arab states. The political mobilisations of the last months however have demanded collective rights for all through all these fragmented spaces - regardless of the Israeli dominance under which Palestinians live.

is the Senior Analyst of Al-Shabaka: The Palestinian Policy Network. She completed her PhD in Middle East Politics at the University of Exeter, where she taught various undergraduate courses and continues to be an honorary research fellow. In addition to her academic work, which focused on indigenous studies and oral history, she is a frequent political commentator writing for various media outlets including The Guardian, Foreign Policy, and Al Jazeera English.

is a Palestinian writer and peace activist. He is the author of the book "Organised Chaos" and has written numerous articles for a wide range of publications such as the Journal of Palestine Studies, the Nation, and The New York Times. His family was expelled from their home in the Ramle district in 1948, he was born in Rafah, Gaza, in 1984. Ahmed Abu Artema is one of the founders of the Great March of Return, a series of demonstrations held at the Gaza-Israel border since 2018 demanding the right to return.

is an internationally-touring and award-winning writer from Jerusalem, occupied Palestine. His work has been featured in numerous international outlets. RIFQA, his debut collection of poetry, will be published by Haymarket Books in October 2021.

is a social scientist, researcher and senior lecturer at the Department of Development Studies at the University of Vienna and a consultant to the VIDC.
Currently, he serves as the project coordinator of the ADA-funded research project ‘Knowledge Production in Times of Flight and War - Developing Common Grounds for Research in/on Syria (KnowWar)’, a cooperation between the University of Vienna, the Syrian Centre for Policy Research, Birzeit University in the West Bank, Alpen-Adria University in Klagenfurt and Mousawat, Beirut.

is a political scientist and has been a project consultant at VIDC since 2005, with a regional focus on the Arab Region and Palestine in particular. She also coordinates a VIDC series on upheaval within the Arab World. As the gender consultant at VIDC, she supervises the area of gender sensitisation of men and works on the implementation of the Women, Peace and Security Agenda. Magda Seewald is a co-founder of the network ‘REloading Feminismus’.