This article was published in the VIDC online magazine Spotlight Oktober 2021. If you want to receive the quarterly Spotlight, invitations and documentations please subscribe here.

“Women take to the street of Kabul to protest against the Taliban”, by Celina Wadhera, The Independent, 17/08/2021.

“The Fate of Women’s Rights in Afghanistan”, by John R. Allen and Felbab-Brown Vanda, The Brookings, 09/2020.

Nazila Jamshidi - a gender equality and human rights specialist involved in Afghanistan’s development and democracy processes for the past decade - has worked for the UN, USAID, the International Federation of Red Cross. Jamshidi, a native of Afghanistan, graduated from Georgetown University and is now an M.A. student at Columbia University. While at college, Nazila worked with Dr. Biden, the U.S. First Lady, for women leadership empowerment programs. 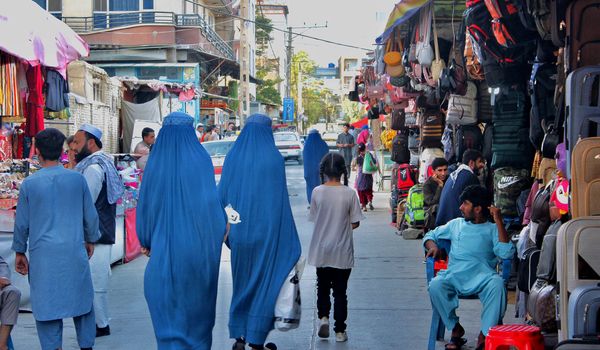 With the Taliban’s takeover of Afghanistan, women’s rights and their role in society are once again a tragedy unfolding in front of the world’s eyes. More than any other group in Afghanistan, women have welcomed and spearheaded the concept of democracy, freedom and human rights. Now they are seeing these advancements disappearing in a flash.
The Taliban insisted they are seeking a peaceful transfer of power and their regime will recognize women’s rights for access to education and job opportunities. Zabihullah Mujahid, the Taliban’s spokesperson, addressing the media at a press conference on 17 August in Kabul, emphasized that women’s rights will be shielded according to the Sharia, or Islamic law, without further elaboration.
The statement inflames fears among women that international standards of freedom, democracy and human dignity, which were established as the result of twenty years of hard work, will be replaced with the restricted role supported by Islamist norms. The cabinet ministers announced on 7 September includes no women to represent in the decision-making – this also provoked dread of a dark future for Afghan women.

Given the Taliban’s treatment of women under its previous reign in the 1990s, women are terrified by the implication of the Taliban’s interpretation of Sharia law. Many women are purchasing burqas, the veil to protect themselves from the Taliban, while other thousands seek possible ways to flee the country. The tragedy that unfolded at Kabul airport in the last weeks of August is an indication of fear and despair among many Afghans.
Benefiting from the freedom and democratic values supported by the international community, women turned Afghanistan into a home for female leaders, activists, judges, parliamentarians, educators and journalists. Through innumerable advocacy programs, in the last twenty years, women were able to create laws and policies to protect their rights.
This has changed since the Taliban have taken power again. After seizing Herat city, the Taliban sent female students and employees home and began to stress Islamic Sharia to define women’s rights. This demonstrates that the Taliban attempt to justify restricting women and rolling back many of the freedom earned by women over the last 20 years.

Following Afghanistan’s fall to the Taliban, female activists, community leaders, and policymakers who worked for two decades to ensure women’s human rights and who are theoretically defended and constitutionally protected in Afghanistan, face an uncertain and dangerous future. Women’s rights activism with the rise of extremely conservative Taliban and their strict interpretation of Sharia law is likely to fall. Hundreds of women activists have already fled out of Afghanistan and hundreds of others are seeking their ways out. Thus, Afghanistan has already lost the majority of its professional activists to the fear of returning to a repressive past. Those who stay have to fight a fundamentalist ideology that rejects the notion of gender equality. The feminists and activists who once freely and proudly worked to promote gender equality will be viewed as enemy number one in a misogynist regime. Whipping women in Kabul while peacefully protesting the all-male interim government is an example of suppressing any women-led movement demanding equal rights.
On 17 August, two days after the Taliban takeover, a small group of Afghan women staged their first protest against the Taliban ideology, demanding recognition for their political, social, and economic participation. The protestors were seen in full black hijab - a much more conservative appearance in contrast to wearing a scarf and what the women of Kabul would appear in public under the Islamic Republic.  It clearly demonstrates the anxiety of women from a fundamentalist regime. Many women in Afghanistan have begun wiping out their social media accounts, fearing a Taliban retaliation. Living in such apprehension will eventually end up leaving many of the female professionals, activists and empowered population out of the country. This will pave the way for establishing an ultraconservative regime and demolishing the last two decades’ hard-won gains.

While some world leaders, such as President Biden, indicated potential aid and diplomatic engagements to continue supporting Afghan women, they need to stand firm on an acceptable level of women’s rights protection. This requires the continuation of the Afghan Independent Human Rights Commission (AIHRC) or other national human rights institutions, such as the Afghanistan Independent Bar Association, Institute of Human Rights and Human Rights Watch, to actively monitor human rights, investigate abuses and establish functional mechanisms to provide quality justice services to vulnerable groups.
The international community  - particularly the United States, its allies, and European nations - needs to apply their tools, like aid and foreign investments, and authority to hold the Taliban accountable for their statement on the protection of women’s rights. Allowing AIHRC and similar bodies to openly monitor and investigate the human rights situation in Afghanistan is an example through which the Taliban should demonstrate their commitment to respect women’s and citizens’ rights.
When it comes to women’s rights, the international community should not simply count on words. The Taliban need to prove their commitment by action. Unlike their previous rule in the 1990s, the Taliban want to be recognized as a legitimate government. They want to ensure their diplomatic, economic, and foreign relations with the world. The international community should not recognize a government that does not show respect to women’s rights in action. Forming an all-male interim government without including women and ethnic minority groups confirms that the Taliban will not respect the rights of women and minorities. Diplomatic and political pressures on the Taliban on an international level can induce them to reconsider building such an all-men government. The international community must stay engaged and put pressure on the Taliban to recognize and protect women's rights, freedoms, and participation.
With the exodus of women’s activists, professionals, and leaders, Afghanistan will face a lack of a professional cadre to advance women’s rights and their participation in the decision-making process. Financial and technical assistance has to be provided by the international community to promote community-based women’s rights organizations and the civil society to preserve women’s gains and prevent further violation of their rights. World leaders should understand that their actions to protect Afghan women’s rights and their role in society will illustrate the true nature of their commitment to democratic values, human rights, and freedom (20 September 2020).