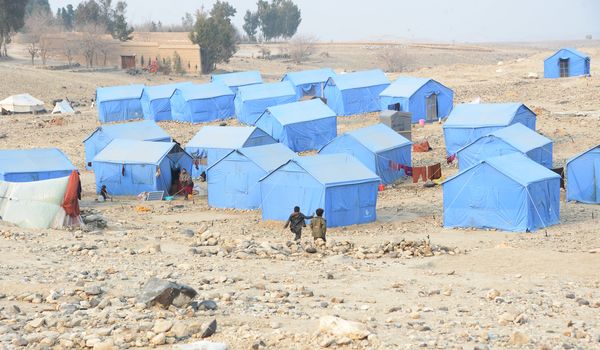 Beshud Camp in the north-west of Nangarhar Province. © ADPRO

The desk reviews are part of a larger project called “‘Dard Kush’ II – Strengthening Livelihoods of Afghan Refugees and Pakistani  Host Communities (with specific focus on women)” currently being implemented by FACES Pakistan in Lahore, together with Caritas Austria and Caritas St. Pölten. The Austrian Development Agency (ADA) commissioned the research.

For more information on the Dard Kush project please visit the website of FACES Pakistan.

For nearly four decades, Pakistan has hosted the world’s largest protracted refugee population. There are 1.4 million registered Afghan refugees in Pakistan, making Pakistan the second-largest refugee hosting country in the world.  This number does not include an estimated 0.5 million Afghans that remain undocumented as well as a population of approximately 4.4 million Afghans that has returned to Afghanistan through the repatriation programme.

The influx of Afghan refugees into Pakistan is rooted in political instability in Afghanistan. Pakistan received the first wave of Afghan refugees in 1978 when the Afghan military staged a coup and took over the government. Subsequently, forced displacement of Afghans underwent through several phases in the 1980s and 1990s, and the last major phase took place after 9/11 when the United States led an invasion to topple the Taliban regime.  In the years of mass exoduses, the United Nations High Commissioner for Refugees (UNHCR) accorded prima facie recognition to Afghan refugees, taking into account the impossibility of determining refugee status on a case by case basis.

The mass displacement of Afghans, both internally and across borders – which began in the late 1970s, peaked in the 1980s and continues to this day – is connected to the different phases of war and conflict in Afghanistan. The ebb and flow of the different conflicts has also meant that many Afghan refugees were repatriated or have voluntarily attempted to return and reintegrate back into Afghanistan, often having to flee again due to an escalation of conflict. For instance, after the fall of the Taliban in 2001, an estimated 5.7 million refugees returned home mainly from Pakistan and Iran. This has prompted the Afghan government to develop frameworks dealing with return and reintegration of refugees and internally displaced persons (IDPs) (“returnees”). Nonetheless, throughout this period, Afghans made up one of the largest refugee population in the world, thus creating a large global diaspora.

The attached desk reviews examine the existing legal, policy and institutional frameworks in Pakistan and Afghanistan, including multilateral and bilateral agreements, that address returnees in Afghanistan and the Afghan diasporas. The papers attempt to identify the existing gaps and challenges in these frameworks in terms of the reintegration and protection of returnees and the Afghan diaspora in Pakistan.