is a freelance journalist and filmmaker. Her film "Saudi's Secret Uprising", released by the BBC in 2014, documented uprisings in eastern Saudi Arabia and drew international attention to protests that had previously received little public attention. In 2017 she received two Emmy Awards for her film “Yemen Under Siege”. Her latest film on Yemen in 2019 “Targeting Yemen” for FRONTLINE exposed the US continued and escalating involvement in the war on Yemen. Al Ahmad has received many awards for her work, including the International Press Freedom Award in 2015. Currently, Al Ahmad works on a feature documentary on the history of resistance in Saudi Arabia.

is an Associate Professor of Political Science at the American University in Cairo (AUC). Her research focuses on comparative political economy and development with a focus on Latin America and the Middle East, as well as state-civil society relations, social movements, and resistance. She currently directs the Alternative Policy Solutions (APS) research project at AUC. She serves on the board of a number of civil society and professional organizations, including the Arab Political Science Network (APSN).

is a political scientist and is head of VIDC's Global Dialogue Department. Her regional focus is the Arab region.  As a gender advisor, she oversees the area of gender sensitization in the refugee context and works on the implementation of the Women, Peace, and Security agenda. She coordinates the funding program for feminist diaspora initiatives launched by VIDC and the association Frauen helfen Frauen helfen. 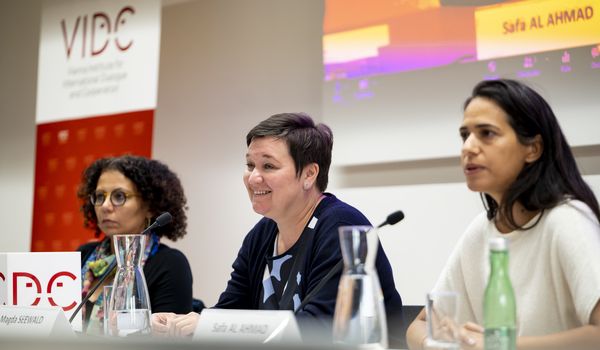 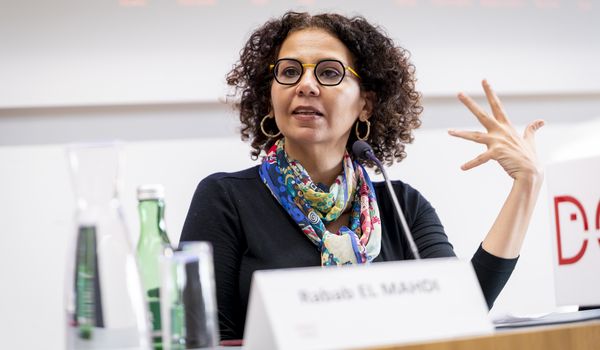 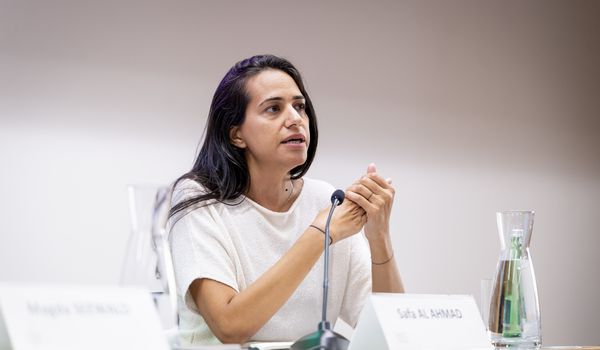 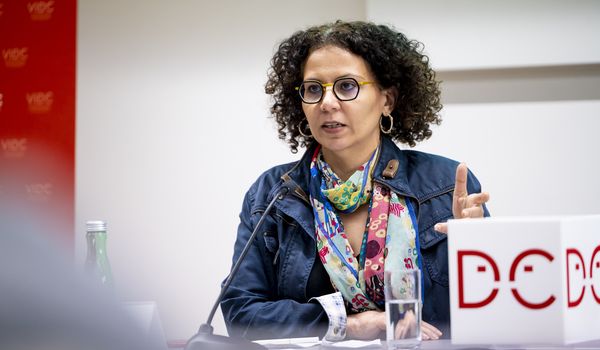 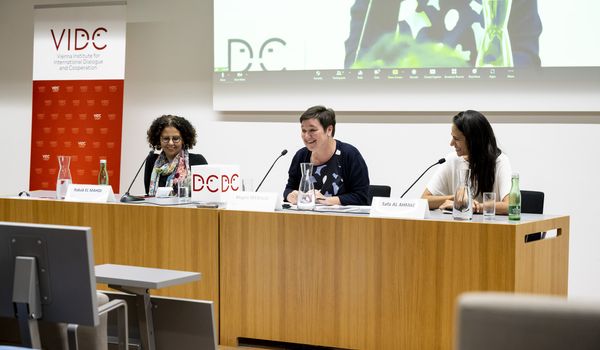 On June 2, 2022, the VIDC held a panel discussion entitled "Capital and Counterrevolution - Framing the Arab Gulf States”, which explored the role played by states such as Saudi Arabia, the United Arab Emirates and Qatar in the financial architecture of global capitalism. A range of issues were investigated during the event. Where do the Gulf States invest and why? The political and military interventions of these states in regional uprisings and conflicts was also critically examined. Saudi Arabia and the UAE’s brutal military intervention in Yemen and their responsibility for the resulting humanitarian tragedy served as the starting point for questions about how these regimes use economic power as a tool to implement their interventionist policies. How are capital and counterrevolution linked and what impact does this have on social movements in the region?

In her introduction, VIDC project coordinator, Magda Seewald, described the increasing levels of investment by Gulf States throughout the world and the resulting expansion of their economic and political influence. Gulf State investors have already strengthened their control in many international companies, including Deutsche Bank and Volkswagen, while entire football clubs are owned by companies and/or individuals from the Gulf region. With the war in Ukraine, the global impact of the Gulf States will likely increase still further.

The first speaker was Saudi freelance journalist and film maker, Safa Al Ahmad, who began by addressing Saudi Arabia’s influence on its immediate neighbour, Yemen. She emphasised that media in Saudi Arabia is highly controlled by the regime, thus, independent opinions are suppressed and is it difficult to access impartial information.

Referring to the event’s title, "Capital and counterrevolution”, Al Ahmad elaborated on how this applies to the Gulf States, and in particular how the various regimes control their media. Even in Qatar, while Al Jazeera for example carries out excellent international investigative journalism, they avoid investigating domestic issues.

Safa Al Ahmad compared the 2011 uprising in Saudi Arabia with those which took place  in other Arab countries. The demands of protesters — such as the release of political prisoners — were similar, however due to the regime’s power to change narratives and declare protesters terrorists and/or supporters of terror, people around the country failed to unite. Journalists attempting to report on the ground face many obstacles, risking persecution and/or being banned from the country. Hence, Al Ahmad explained, the price of independent journalism in the Gulf States is frequently too high and "the reality is, that when it comes to independent local journalism in the Gulf, [it] is non-existent.”

Control over media coverage of the war in Yemen is very similar. Al Ahmad described the war in Yemen as “a disaster and senseless bloodshed”. War crimes are endemic, infrastructure is being destroyed, the previously rich party landscape no longer exists, and the media is severely controlled. As reporting from the country is no longer possible, the Saudis and Emiratis now have a free hand to exercise violence, and this unstable and dangerous situation has been tipped in their favour. According to Al Ahmad, these restrictions on the media "are the direct results of the ability of the Saudis and the Emiratis to control by capital.”

In Al Ahmad’s opinion, the West is indifferent to the precarious situation for journalists on the ground and the Gulf State’s blatant disregard for human rights, remaining primarily concerned with maintaining stability and preventing/combatting terrorism. She referred to the killing of journalist Jamal Khashoggi as a high-profile example; that not even his murder in the eyes of the world led to any serious consequences for Saudi Arabia.

The second speaker was Rahab El Mahdi, Associate Professor of Political Science at the American University in Cairo, who addressed the importance of the Gulf States to the wider Arab region. She began her presentation by outlining how Saudi Arabia, the UAE and Qatar spearheaded the financing of the counterrevolution during the uprisings in the Arab countries. Even though Qatar and Saudi Arabia initially supported revolutionary forces in some countries — Qatar in Egypt and Saudi Arabia in Syria — this did not mean that they supported the revolutions themselves, rather that the capital of these states led to the uprisings becoming violent and sectarian. In this way, the Gulf States altered the revolutions through their money and influence, thus making a direct impact on civil society by deciding which groups would receive financial support. "People in Tunisia were horrified by what Qatari money was doing in terms of changing the landscape of the Tunisian civil society after 2011." Thus, these states occupied a special position of financial power in the wake of the revolutions.

According to El Mahdi, the position of Saudi Arabia, United Arab Emirates and Qatar in global capitalism has changed. Western influence in these countries is diminishing, and this also applies to the other Arab countries. Here, too, Western influence is waning and the influence of the Gulf States is growing steadily.

Another aspect mentioned by El Mahdi was that the new ruling classes are attempting to make their countries attractive through cosmetic and artificial modernisation, rather than through revolutionary changes. She gave the example of women now being allowed to drive in Saudi Arabia, while those who fought for this right are now in prison. "The counterrevolutionary element and the devastating role that these three countries tend to play not only on their societies but throughout the region gets masked by the fact that they have made these changes which part of their elite uses and enjoys but at a very high expense”.

To conclude, Rabab spoke about the impact of the normalisation of relations between the Gulf States, especially the UAE, and Israel. This impact is not only economic and/or diplomatic, but also societal, and will put pressure on other Arab countries to also push for this new normalisation. The big losers will be the Palestinians, who will lose support, especially financial, from the region.

The final contributor was Adam Hanieh, Professor of Political Economy and Global Development at the University of Exeter, UK, who addressed the role of the Gulf States in global capitalism; specifically how Gulf capital and Gulf investment flow through global capitalism. Hanieh began by describing the Gulf States rich tradition in the oil trade. Following the Second World War, they were the world’s main oil-producing region, however in the 1960s and 70s this balance began to shift; North America began to increase oil production, resulting in a split in the world market between North America and the Middle East. The 1970s were a crucial period for the formation of the global financial world we know today: The financial hegemony of the USA and UK, the US dollar and City of London took on important roles, all these factors are closely related to the surpluses of the Gulf oil money.

Hanieh detailed how money flows from the Gulf States have changed over the years and how various global crises have strengthened their respective financial positions. The main players in Gulf financial flows are firstly, the states themselves, and secondly, sovereign wealth funds — the four largest in the world being from the Gulf States (Abu Dhabi Investment Authority, Kuwait Investment Authority, Public Investment Fund in Saudi Arabia, Qatar Investment Authority). According to Professor Hanieh, an “insane” amount of money flows from these states to other countries in various forms, including from state actors, business conglomerates, and/or private individuals; he also stressed that frequently these are related, as “the line which is often drawn between the state and the ruling class, or private capital is false in somewhere like the Gulf because members of the ruling family have significant private business interests."

Since the 2008 financial crisis, the Gulf States began investing in a more diverse range of companies, including Deutsche Bank, Volkswagen, and Daimler. An increase in investments in the MENA region was also observed as a result of neoliberal economic policies in these countries, especially in the banking sector, leading Hanieh to conclude that the political power of these financial resources in the Arab world is increasing. Hanieh also noted that 20% of the world’s weapons trade between 2016-2020 went to the GCC countries, and commented on the essential role Gulf capital plays in the US stock market.

The discussion which followed highlighted the investments made by Saudi Arabia and the UAE into the central banks of other countries; a situation which gives Gulf States power over these countries, as they can threaten to withdraw this money, as happened in Egypt when President Mursi came to power.

All speakers agreed that Gulf State regimes prefer to remain blind to the poverty that is undoubtedly present in their own countries, as wealth is concentrated in the hands of a small elite, while migrant workers, who make up a high number of workers in the Gulf States, are often excluded from statistics.