Despina Syrri is the founder and head of Symbiosis- School of Political Studies, affiliated to the Network of the Council of Europe. She served as Education Specialist at the UNICEF Refugee and Migrant response in Greece, Advisor to the Regional Cooperation Council Political department in Sarajevo and Senior Expert on the Roma Integration 2020 in Belgrade. She has been a visiting fellow at the Amsterdam Centre for Holocaust and Genocide Studies, and director of research and international cooperation at the Immigration Policy Institute in Greece. 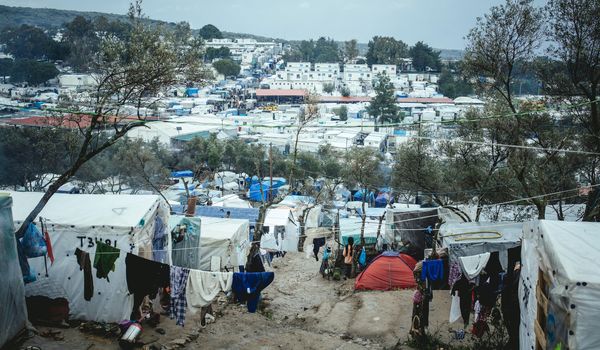 We are deeply concerned about recent developments at the Evros border and the Aegean islands where people are stranded at the borders of Europe, instrumentalized for political purposes, and subject to violations of their rights. We are also deeply concerned about the way the authorities of Greece and the European Union are handling new arrivals.
Equally alarming are the extreme actions by security forces against refugees and by civilians against staff of human rights and humanitarian organizations. We also denounce the attacks on organizations that defend human rights and humanitarian organizations, noting that without the support of these organizations, the refugee management system in Greece would collapse. In addition, solidarity has been stigmatized and become the target of suspicion, which has been also exacerbated by members of the Government, fomenting violence and lawlessness in society in general. We denounce any statements, actions or policies that foment or tolerate bigotry.

We also point out that the climate of panic and rhetoric of ‘asymmetric threat’ –also promoted by the authorities– does not reflect reality and seriously affects not only vulnerable refugees- but also our society and the rule of law.
We firmly express our opposition to the recent decisions of the Greek Governmental Council on Foreign Affairs and Defense (KYSEA), and in particular the adoption of the Emergency Legislative Decree, which stipulates the suspension of the right to seek asylum for all people entering the country and their return without registration, to their countries of origin or transit. Applying such a regulatory provision is inhumane and illegal as it violates the fundamental principle of non-refoulement, incurs international responsibilities for Greece and endangers human lives. It is beyond dispute that Greece has the sovereign competence to control its borders and to manage any crossings there. Nevertheless, the right to seek asylum is a fundamental human right enshrined in the Universal Declaration of Human Rights and the EU Charter of Fundamental Rights.

We recall that the EU should assume substantial responsibilities for the protection of people on the move in a manner that demonstrates respect for human dignity and lawfulness and as a matter of shared responsibility among EU member states in the context of managing what is, first and foremost, a European issue. The right to asylum and the respect for the principle of non-refoulement are fundamental elements of international and EU law and therefore the authorities of the European Union must take the necessary measures for their protection.The European Commission, as the guardian of the Treaties, should protect the right to asylum as enshrined in EU law. Therefore, it should reverse the “aspida (shield)” rhetoric used by Greece and urge it to assume its legal obligations.

In closing, we call on all sides to respect the law and safeguard European democratic values. Any further backsliding will have major consequences on European societies, European democracy and the rule of law.

On 27 February 2020, Turkey announced that it would no longer stop refugees trying to cross its borders into Europe, which have been closed since 2016, with some reporting even active organizing of busloads of refugees to the border by force. Greece has responded with a package of inhumane measures that violate EU and international law. Security forces have been firing tear gas and repelling dinghies trying to reach Greece’s shores. The government has also suspended registration of asylum claims for a month. This is a violation of Greece’s responsibilities under the 1951 Geneva Convention on Refugees, stating that people should have the right to claim asylum, and not be penalised for crossing borders in order to do so.
Turkey’s decision to ‘open’ its European borders, possibly linked to its recently expanded military intervention in the Syrian war, represents the collapse of the refugee deal signed with the EU in March 2016. Despite Turkey’s role in hosting 3.7 million displaced Syrians, this decision uses the lives of refugees as a bargaining chip.
The EU never fulfilled a promise made in 2015 to relocate refugees en masse from Greece, leaving many trapped in appalling conditions in camps and the mainland. On islands, local residents have become increasingly frustrated, in recent weeks clashing with riot police over the Greek government’s attempt to start building ‘closed’ camps – detention centres – for asylum-seekers. Vigilante groups, some with links to the far right coming from all over the world, have been attacking migrants, NGO staff, humanitarian workers, volunteers and journalists. Migrants told reporters that they had been shot by live bullets from the Greek side of the border, with one person killed. Greece’s government dismissed these claims as “fake news”.
Ursula von der Leyen, the president of the European commission, thanked Greece for being Europe’s ‘aspida’, the Greek word for shield. In September she launched her presidency by renaming the EU’s head of migration policy the “Commissioner for protecting the European way of life”, a wording later altered. Brussels have largely stayed silent on the reports of violence at the border and send clear messages that the “border is closed”. European leaders have been quick to pledge their solidarity with Greece, but this translates into support for border control rather than resettling refugees among countries better equipped to accommodate them (8 March 2020).