Nazila Jamshidi is a gender equality and human rights specialist involved in Afghanistan’s development and democracy processes for the past decade – has worked for the UN, USAID, the IFRC, and various other international organizations. A native of Afghanistan, Jamshidi is now an M.A. candidate at Columbia University. 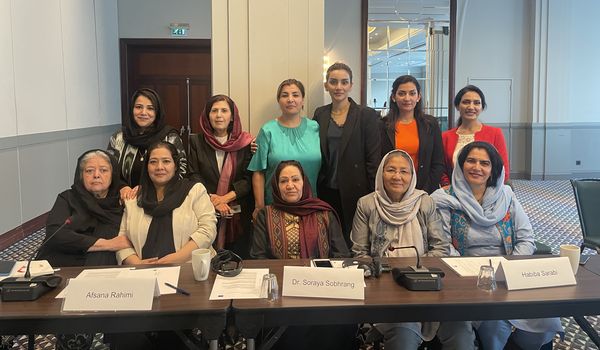 The second Afghan Women Leaders Forum (AWLF), initiated and supported by the EU and European External Action Service, took place on May 19-20 in Brussels. AWLF brought together a wide variety of Afghan women, including civil society and political leaders, activists, lawyers, journalists, and representatives from the women's movement, both within and outside Afghanistan. Nazila Jamshidi, a Human Rights and Gender Justice Specialist, attended the forum and shares insights on the current EU policy toward Afghanistan and its crucial role in restoring women's human rights.

After two decades of progress toward women's freedom and human rights, the burqa, the attire covering the entirety of a woman's body with only a narrow mesh screen for vision, has again evolved into the symbol of women's oppression in Afghanistan. Nine months after Zabihullah Mujahid, the Taliban spokesperson, publicly promised that women's rights under the control of the Taliban would be protected, women have increasingly been constrained in their every human right. By replacing the Ministry of Women's Affairs with the Ministry for the Propagation of Virtue and the Prevention of Vice, and the Afghanistan Independent Human Rights Commission (AIHRC) in prison in Bamyan, they revealed their animosity toward every instrument that can promote and protect women's rights and eliminate gender-based violence, as perceived to be the legacy of an Afghan constitution supported by the occupiers. In addition to the denial of women's rights to work, pursue an education, access to opportunity, peaceful assembly, and freedom of expression, the Taliban's repressive decrees have continually targeted women. Outlawing women from traveling without Mahram and imposition of mandatory hijab to wear the head-to-toe burqa are the recent ways of escalating the assault on women's rights by the Taliban. The image of Khatera Ahmadi, a female TOLO News presenter who has been forced to cover her face and wear a black hijab, illustrates the strain and suffering of about 20 million women and girls in the country — half of Afghanistan’s estimated 40 million population. Undoubtedly, the Taliban's overwhelming misogyny neither began nor will end with the imposition of the burqa. A burqa is just a visual or linguistic synecdoche of the plight of Afghan women.

Gender equality is one of the shared values and norms of the EU. The EU has recognized the promotion of gender equality as a principle, an objective, and a vital task. It was identified for the first time as a cross-cutting issue in the 2005 European Consensus on Development, which defines women's empowerment as a key to development. In 2010, the EU adopted the EU Plan of Action on Gender Equality and Women's Empowerment in Development — the operational document that aims to strengthen the coordination and implementation of the agreed EU gender policy. In December 2020, the Council adopted a decision and a regulation establishing a global human rights sanctions regime. The EU targets individuals, entities, and bodies responsible for involvement with serious human rights violations and abuses worldwide, no matter where they occurred.
After the Fall of Afghanistan to the Taliban in August 2021, the EU has made it clear that any future development assistance to Afghanistan will highly depend on respect for the international norms and legal human rights framework, including women's and girls' rights. In the first and second meetings of the Afghan Women Leaders Forum (AWLF) in Brussels in March and May 2022 — the meetings initiated and facilitated by the EU — the EU Special Envoy for Afghanistan, Thomas Niklasson, indicated that the EU has taken a principled position toward protecting women's rights and stated, "we are determined and committed to continue to support the women and girls of Afghanistan and elsewhere, in line with our values and principles." AWLF includes a wide variety of Afghan women; civil society and political leaders and activists, businesswomen, lawyers, journalists, and representatives from the women’s movement, both within and outside of Afghanistan. Those meetings stressed the importance of dialogue and engagement with all relevant local, regional, and international actors and exploring different models for dialogue that will allow Afghan women to influence and play a meaningful role in the country's future.

Since regaining power in Afghanistan, the Taliban's pledges about respecting women's rights have not been compelling. While at the Oslo, Norway talks, the Western diplomats pressed the Taliban to recognize the rights of girls and women to education, the schools' doors for girls remained closed. Thus, such means of diplomacy with the Taliban have proven not to be an effective tool for protecting women's rights and dignity in Afghanistan. Instead, the Taliban and their supporters take the traveling of the Taliban leaders and those still on the UN sanction list to the western countries as an endorsement. Many European countries have been talking to the Taliban about the evacuation of those who served their missions in Afghanistan, which led to the evacuation of 22,000 Afghans, including human rights defenders, journalists, civil society activists, and judges. The European countries have also talked to the Taliban about humanitarian aid and possible development cooperation. EU foreign affairs ministers agreed that the EU would engage with the Taliban, meaning establishing a diplomatic presence on the ground in Kabul, if they respect human rights, particularly women's rights, and build an inclusive and representative transitional government. These diplomatic relations have yet to result in behavioral change in the Taliban, particularly concerning women's rights protection.
On the other hand, European countries have no alternative but to talk to the Taliban. The standoff between the Taliban and the international community only harms Afghans who struggle with a dire economic and humanitarian crisis. Certainly, humanitarian assistance is one of the only common languages shared by Kabul and the West today and thus, should be utilized effectively and constructively.

The EU's engagement with the Taliban in an informal form and concentrated on specific demands for women's rights, such as access to education, employment, and protective judicial services, can eventually protect Afghan women's rights. The West already suffered a pathetic failure in Afghanistan last summer. After two decades of investment of lives and resources in Afghanistan, the Taliban, with the same ideology about women's rights, seized power. Unless the Taliban guarantee their obligation to human rights protection, lack of engagement will translate into further defeat for the West. However, the engagement should not mean recognition or support for the regime committed to the massive human rights violations. Instead, the European countries should convey their direct message that any cooperation will be conditional based on the Taliban's respect for women's rights.

The Taliban will remain inflexible on their ideology about women's rights if they are not being pushed by those who have leverage and are capable of helping them to their country's security, repairing the economic system, and reverting humanitarian crisis. It is time for the European External Action Service, a body that aims to make EU foreign policy more coherent and effective and increase Europe's global influence, to ascertain its value toward human rights protection and for its leaders to get back in the game differently and effectively. With the Taliban grimly persisting in their belief about women's rights, and a suffering population deprived of human rights, the EU cannot be too ambitious. Still, they should identify a specific set of rights to be realized, including rights to have access to education, employment, and just legal services. Considering some lessons learned from the last 20 years, including using women's rights as a political pawn and underrating the power of unmet basic needs of ordinary people, the EU needs to take steps carefully and stay engaged. Some of the continuous and necessary actions that the EU can and should take to restore women's rights in Afghanistan include:
1) holding an informal dialogue with the Taliban in Doha or elsewhere without having its diplomats in Kabul and stressing the conditionality of future cooperation and aid based on women's fundamental rights.
2) Through an extreme interpretation of Islamic Sharia, the Taliban violate women's rights. The EU should exercise its leverage on Islamic regional countries, particularly those in close contact with the Taliban, like Qatar and Pakistan, to understand Islamic justice and highlight them in the talk with the Taliban.
3) The EU should involve Afghan diaspora communities from Europe in the dialogue and formulating its policy with the Taliban.
4) Finally, the EU should not hesitate to use political and economic hard power against the Taliban if they continue to inflict extreme standards on women. (17 June 2022)