Afghanistan Between War and a New Beginning

Afghanistan Between War and a New Beginning

Report from the panel discussion on 2 December 2019

works as a journalist at the French press agency Agence France-Presse (AFP) and as director and researcher at the Afghanistan Development and Peace Research Organization (ADPRO) in Kabul, Afghanistan.

has founded the Farkhunda Trust for Afghan Women's Education in London and is its director. The Farkhunda Trust was established in memory of Farkhunda Malikzadeh, who was brutally murdered in March 2015, to support Afghan women seeking higher education.

is a feminist activist and researcher who was born in Afghanistan and lived with her family as a refugee in Iran and Pakistan during the Taliban period. Her family returned to Afghanistan in late 2006 after 10 years in exile.

is a PhD student at the Department for Migration and Globalisation at the Danube University Krems (DUK). Ahmad has been working as a consultant for the VIDC since 2015 and has written research papers on Afghan refugees and diaspora communities in Europe. 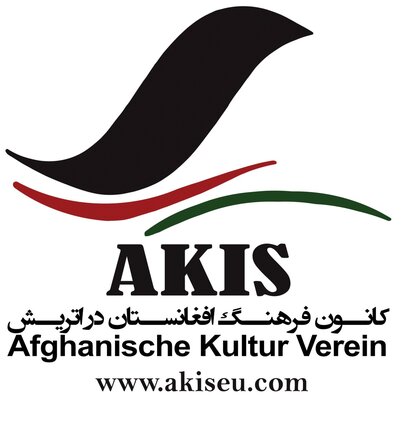 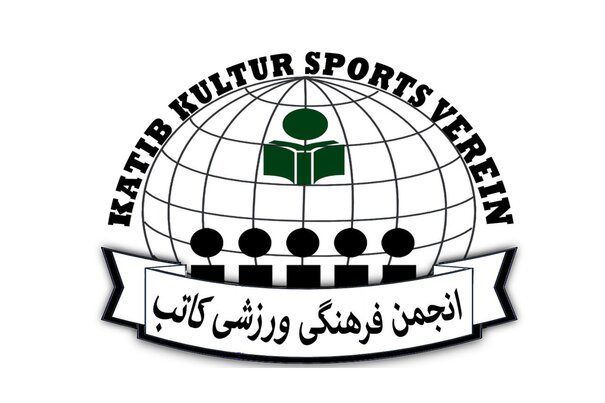 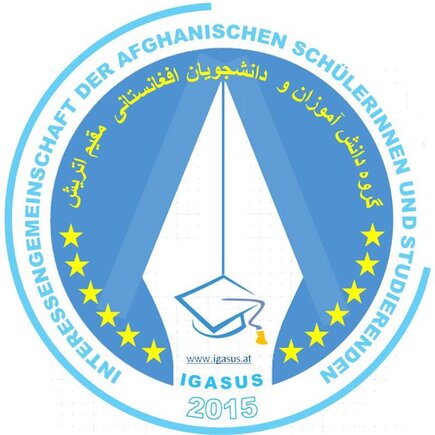 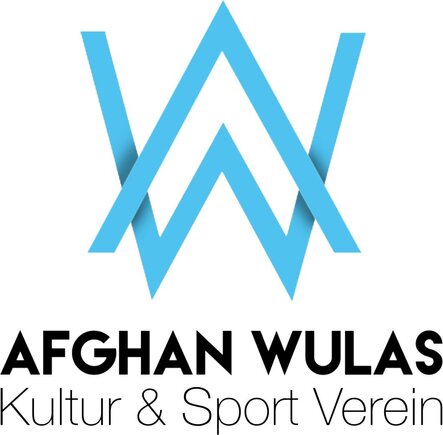 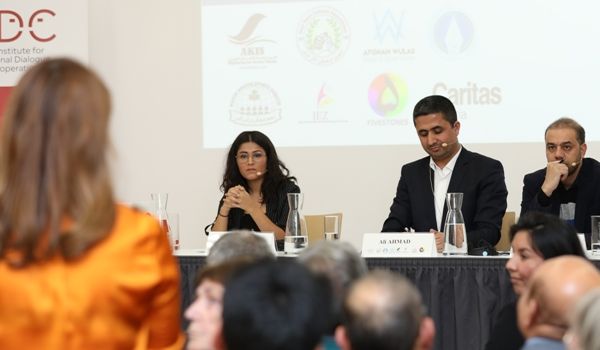 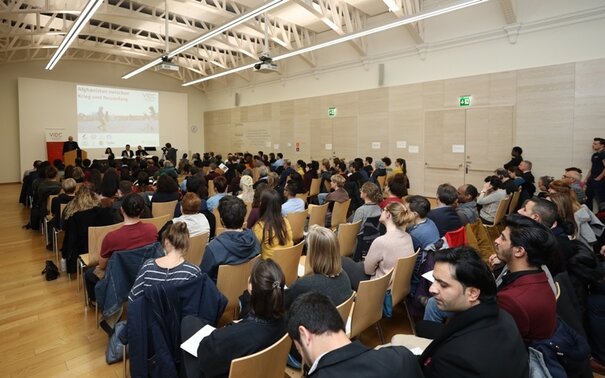 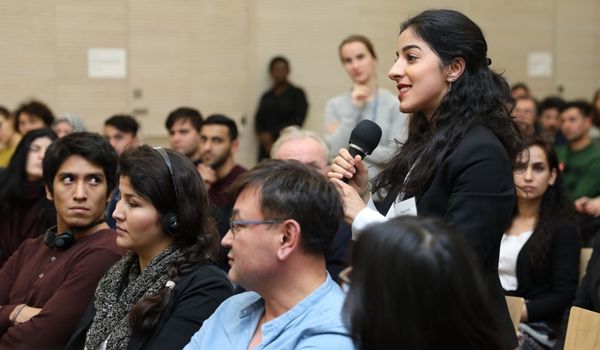 In December 2019, Afghanistan celebrated a sad anniversary: For more than 40 years, the country has been at war on the Hindu Kush, which has gained momentum and horror again in 2019. On this occasion, the VIDC invited the journalist Emal Haidary and the feminist activist and researcher Sahar Fetrat to a discussion in Vienna on 2 December 2019. Originally, Rahela Sidiqi from the Farkhunda Trust for Afghan Women's Education in London was also supposed to take part in the discussion, but she was refused entry to Austria by the Austrian authorities at Vienna airport because she was not allowed to enter Austria without a visa with her British refugee passport. Previously, Mrs Sidiqi had entered other Schengen countries, such as Germany and Denmark, with the same travel document without any problems and without a visa. The event was moderated in front of more than 200 visitors (half of them from the Afghan diaspora) by the Afghan researcher Ali Ahmad, who also works as an Afghanistan consultant for the VIDC.

"Afghanistan today is as broken, as exhausted and as insecure as its citizens and most of us from Afghanistan who are in this room today. (...) Afghanistan between war anda new beginning, these are millions of us born during the Taliban regime and raised either in neighbouring countries as refugees or in Afghanistan, who have reshaped their destiny after the US-led invasion of Afghanistan in 2001. They represent the ambivalence of a generation that does not feel safe either at home or away from home," Fetrat said. How could this happen? After all, at the beginning of the expulsion of the Taliban from power, there was hope for a positive nine-start, as Haidary reported in his opening statement: "For almost a week, people could not believe the news that the Taliban were no longer there and that they were free. Many did not really remember what the word 'freedom' meant. It was a new beginning. Life after the Taliban was moving fast; millions of refugees were returning home. (...) The girls began to go to school. The United Nations peace mission, the presidential and parliamentary elections, a new constitution, a new currency, a sudden economic boom, mobile phones and the internet; everything seemed to be on the right track."

But all the achievements and freedoms of the post-Taliban era seem to be at risk again. "After almost 18 years, it's once again either the Taliban and terrorism or burqas and beards," Haidary says: "To the world, Afghanistan looks like an 'untamable' nation. (...) The euphoria that flooded the country after the Taliban's 'defeat' is as good as over. It has been replaced by a feeling of disappointment, frustration, disbelief and anger. Skepticism and cynicism have replaced the optimism of the early post-Taliban days. Especially the peace agreement between the US administration and the Taliban, which was concluded without the participation of the Afghan government, is fuelling new fears, as Fetrat emphasized: "I left Kabul in August 2018 to do my Master's in Gender Studies, and when I returned to Kabul in the summer of 2019 for my research, I noticed an enormous change in the public discourse. At every meeting, every meal and every taxi ride, there was a common conversation: the peace negotiations with the Taliban and the question of the return of the Taliban to power. (...) I observed that women in general and feminists and women's rights activists in particular were particularly concerned about the outcome of a possible peace agreement with the Taliban. Yet, according to Fetrat, Afghan women are by no means idle "victims" who have to be "saved" by geopolitics, but rather they are becoming active and want to be part of a new beginning in Afghanistan: "The Western media are currently obviously fascinated by how Afghan women fear the possible return of the Taliban, but not by how Afghan women in different provinces are resisting it; how they are mobilising, organising and working together to find and negotiate other ways of resistance."

For Haidary, too, time cannot simply be turned back, even if he sees no alternative to the US-Taliban peace talks: "Afghanistan is losing young men and women every day.  Schools are being burned down. Reconstruction is being reversed. People are discouraged. (...) Afghan women are desperately waiting for Washington and the Taliban to reach an agreement to end the violence soon. People are therefore sceptical at the moment but very hopeful. The question, however, is who will pay the price for peace, said Fetrat: "What kind of peace, for whom? We cannot negotiate between peace and women's rights. It cannot be called either women's rights or peace." For Haidary, the country and its people have changed over the 18 years. Especially the youth would not simply accept a return to the Taliban era. Hence his hope: "It may be too late for the Taliban to try to turn the tide!" However, Fetrat does not want to rely on this and calls for the USA and its allies to assume their responsibility even in the event of withdrawal from Afghanistan: "It is time to stand by the women of Afghanistan by demanding meaningful representation at the negotiating tables and questioning the fact that guaranteeing women's rights is the sole responsibility of women.

The discussion about war and the new beginning in Afghanistan was part of the network conference " Knowledge Transfer and Support. The Role of the Afghan Diaspora in Europe", which was organised by the VIDC on 2 and 3 December 2019. For the first time in Austria, the conference brought together Afghan diaspora organisations and experts from nine European countries with public institutions, international organisations and development NGOs to highlight the diversity of Afghan associations and discuss best practice examples from various European countries. In the plenums and workshops of the conference, the status quo of diaspora and migration policy in Europe and Afghanistan was discussed, as well as financing models, networking of Afghan diaspora organisations, (self-) empowerment of Afghan women, the challenges of project work in Afghanistan and Pakistan and the problems of Afghan refugees in Pakistan and in Europe with regard to integration. In addition, recommendations for future measures and for a better integration of Afghan diaspora organisations in development and migration policy were developed, which are described in the guide A Guide to Afghan Diaspora Engagement in Europe. Examples of good practice and recommendations from the Vienna Networking Conference "Knowledge Transfer and Support".