is a PhD Candidate at the Religious Studies Department of the University of Zurich and has done her MA in Peace, Conflict Transformation and Security Studies at the University of Innsbruck. She is also the author of a book on Reconciliation and Social Healing in Afghanistan.

is an Afghan human rights defender and journalist with around 26 years of work experience in Afghanistan and South Asia region, in the fields of human rights, peace, justice and reconciliation, transitional justice, gender, security and violent extremism.

is the Country Director for the Danish Refugee Council in Afghanistan. As one of the largest international NGOs in Afghanistan, Rowell is responsible for a team of over 700 staff working in 18 provinces of the country across a range of sectors focusing on humanitarian response and longer term durable solutions.

is a PhD candidate at the Department for Migration and Globalisation at the Danube University Krems (DUK). He received his Master‘s degree in Peace and Conflict Studies from the European Peace University (EPU). Ahmad has been working as a consultant for the VIDC since 2015.

is a political scientist. His main areas of work at VIDC Global Dialogue are migration and development, human rights, and anti-discrimination, with a regional focus on the Middle East. 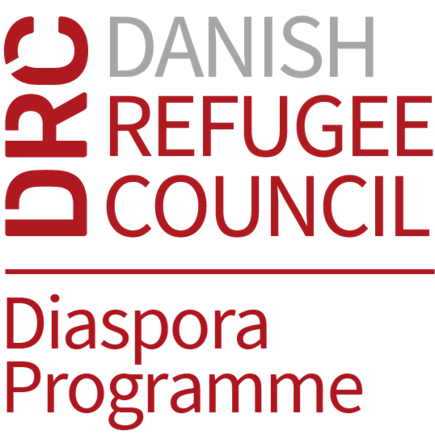 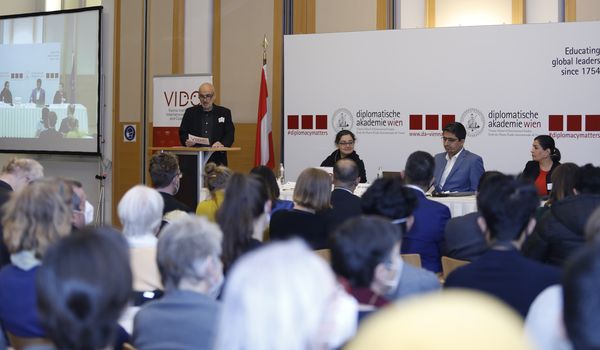 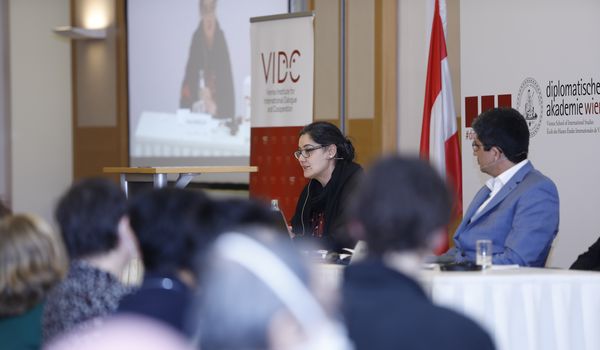 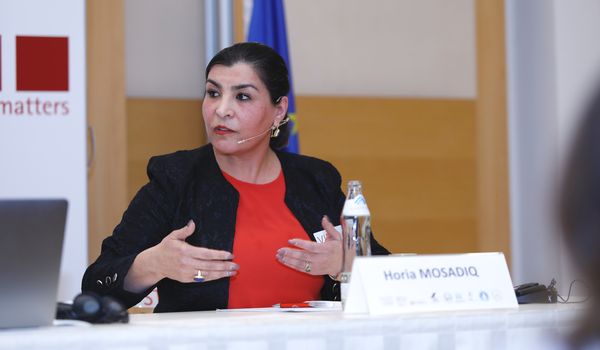 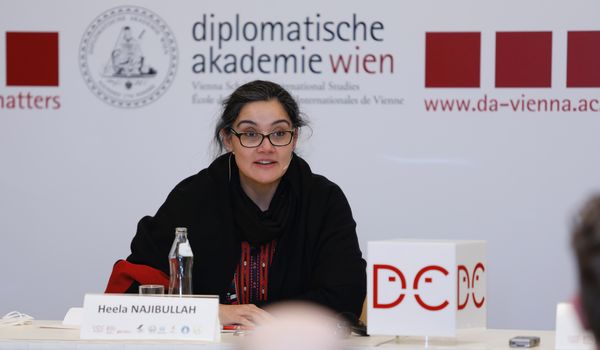 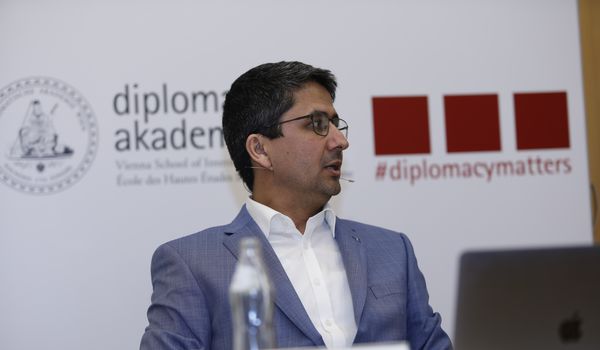 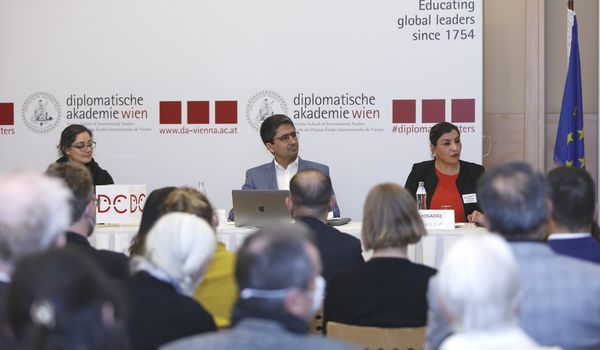 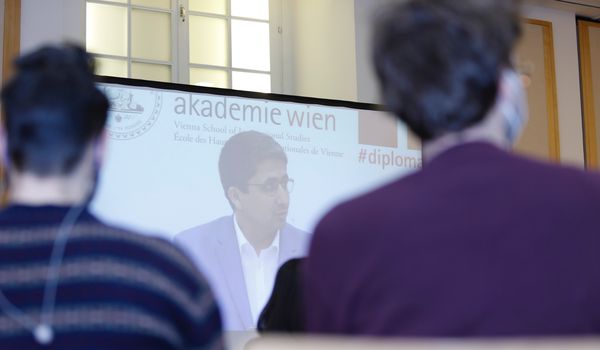 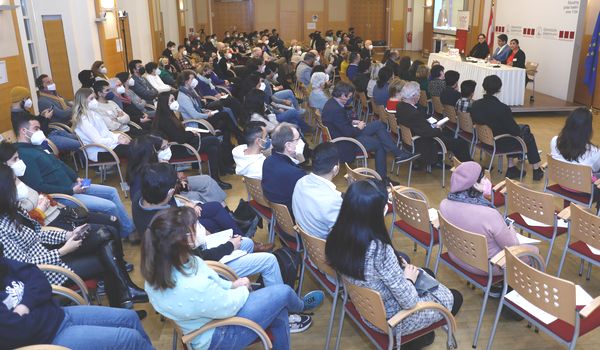 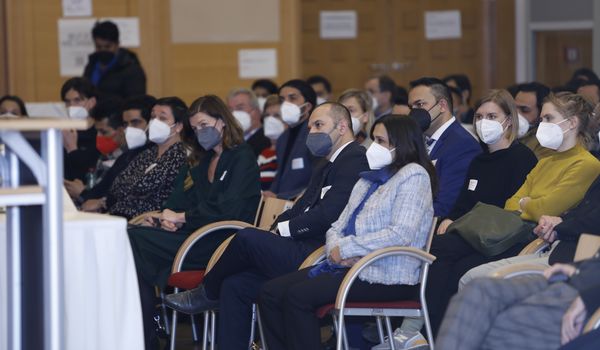 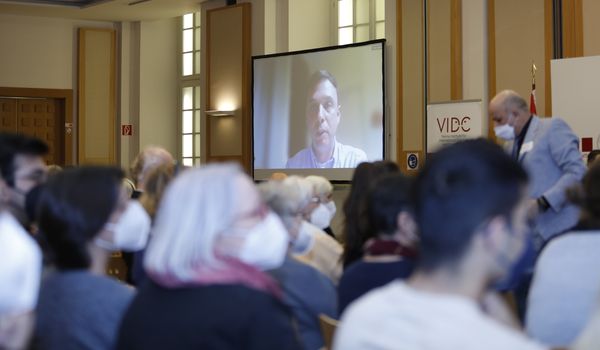 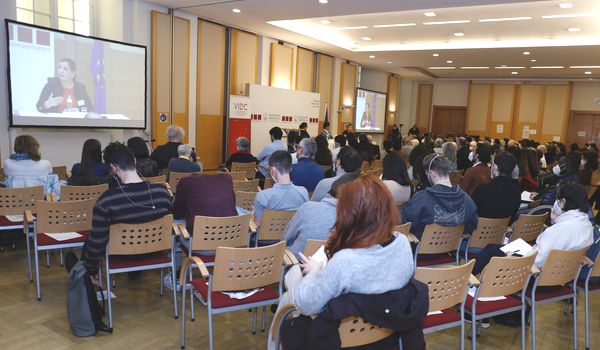 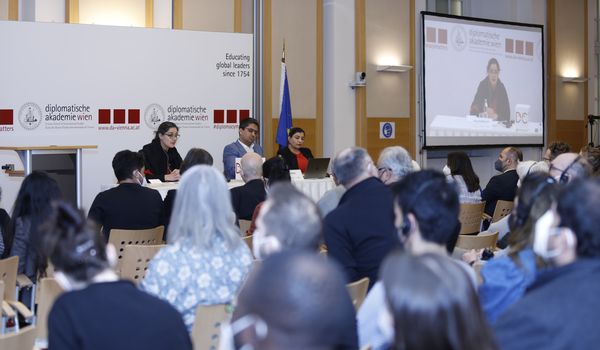 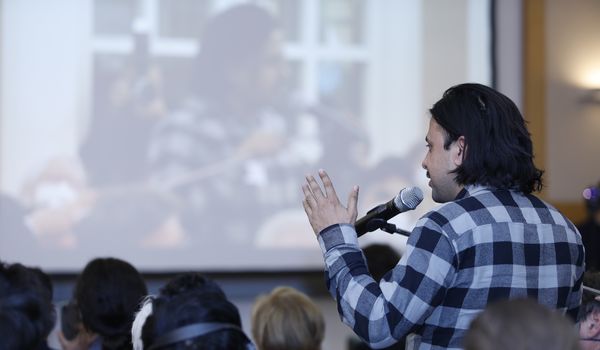 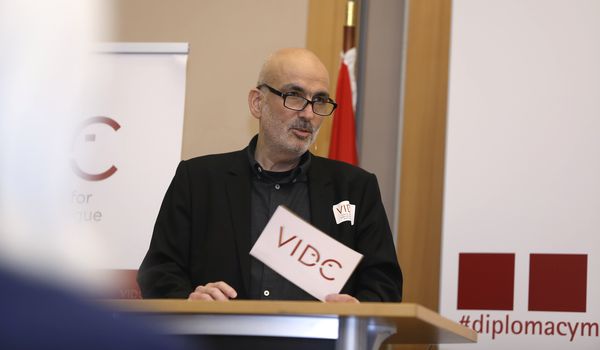 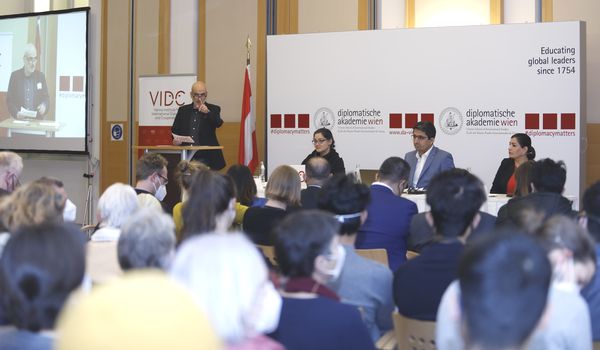 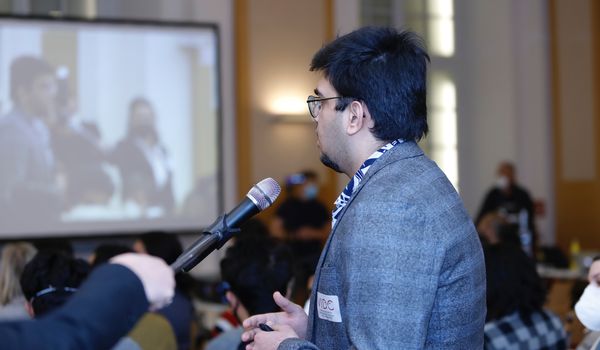 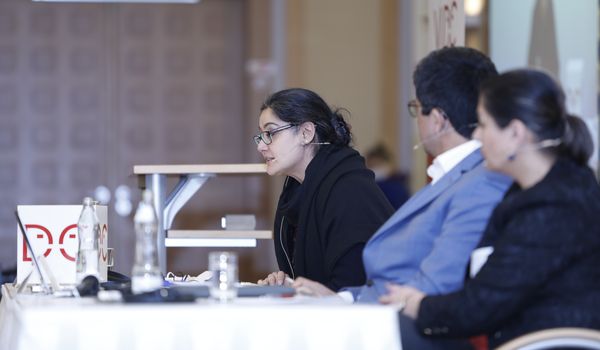 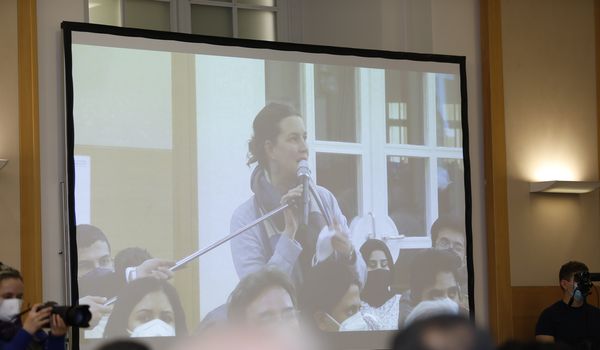 March of 2022 marked six months of the Taliban’s return to power in Afghanistan. Six months before, in August of 2021, the Afghan state collapsed. The international forces withdrew after two decades of war and the Taliban got control. This comeback delivered catastrophic results in just six months. To discuss the details of this enormous change including perspectives for the future, VIDC invited Heela Najibullah, Horia Mosadiq and Jared Rowell. Najibullah is a Ph.D. candidate with masters in peace, conflict, transformation, and security. She is also the author of “Reconciliation and Social Healing in Afghanistan“. Horia Mosadiq is a Afghan human rights defender and journalist, and Jared Rowell, the country director of the Danish Refugee Council (DRC) in Afghanistan.

Jared Rowell started with an overview of the situation. Afghanistan is facing “an extreme humanitarian crisis.“ Over half of the population – 22,4M people – are currently food insecure with 3,7M people at extreme risk. At least 1700 health care centers have closed throughout the country, especially in rural areas. There has been an increase in diseases caused by not having access to clean drinking water and bad living conditions like cholera and measles. People must travel long distances to get health care. Covid-19 data/treatment is no longer reliable due to the lack of a testing system.

He explained that there are reports of increased gender-based violence, sexual exploitation, abuse, and early marriage since August. Parents need their children to work instead of going to school. Drug use has increased due to the trauma in the country and so has violence. There have been 700K new IDPs and up to 20K returnees per day from countries like Iran and Pakistan because they are not able to find work there and are forcibly sent back. There has been 30% reduction in the gross domestic product (GDP) and currency depreciation is -12%. Teachers, government workers, etc. are not paid. Jared Rowell added that the UN’s annual Humanitarian Response Plan for Afghanistan in 2022 is 4,5B USD. This is the single largest UN appeal in the UN’s history. It also highlights the incredible number of needs.

Jared Rowell asked for political solutions on the central banking cash flow and clarity on exemptions to sanctions for humanitarian aid. There needs to be an emphasis on the importance of open borders for evacuations and migrations, including Europe. Pakistan and Iran are not ideal places to stay long-term. “Looking forward“, he concludes, “If people, particularly women and children, have very clear reasons why they may need to migrate to safer countries, particularly in Europe, we need to encourage and advocate for European countries to give easier access for those vulnerable people to be able to seek asylum there. We need to mitigate the threat of the Islamic State (IS-KP). We need to have a greater focus on durable solutions. We are not going to be able to tackle the longer-term issues, particularly for women and children, if we don’t have longer-term models that allow us to provide greater support.“

Heela Najibullah responded, “Afghanistan is poor, not only geopolitically strategically in the region but also globally. The fall of the Afghan government in August of 2021, was basically the takeover of power by a radical extremist group with the power of a gun and bleeding the Afghan government.“

She pointed out that every peace process usually contains certain elements that form its basis and must make it credible to the people. But throughout the 3 years of the Doha peace process between the US and the Taliban, it was never people-centric: “One of the fundamental challenges was the fact that the US had decided to withdraw their troops and that was the main focus of the Doha agreement. Not the durable political solution that the Afghans were looking for, to find peace.“

As a result, she added, the US and its allies were defeated. According to the Haqqanis (a radical Taliban organization), the Jihad won once again: “Although the Taliban say they declared amnesty for those who worked with the previous Afghan government but that isn’t the fact. People who worked in the army, individuals against the Taliban ideology, and women who stand for their rights are systematically tortured, taken hostage, put in detentions, and killed. Anybody that challenges the view of Islam the current Taliban regime has, gets isolated, tortured, or killed.“

Moving on to perspectives for peace, Heela Najibullah argued that finding peace is a question that policy and decision-makers in the international community and Europe need to ask themselves. Whether they want to use Afghanistan for peace or war-making against the rivalries in the world. If the objective is to have peace in Afghanistan, she stressed, there needs to be simultaneous and parallel processes put in place. At the national level and at the international and regional level.

According to her, a Loya Jirga (Afghan traditional grand assembly), can be a truly representative body of the people of Afghanistan. That’s what the traditional role of Loya Jirga is, she argued: „Not individuals should be selected or older groups that have proven themselves to be destructive for Afghanistan. A consultation process or decision-making body must be created that is able to bring about political decisions that eventually lead to an election. And there is a need to have active political parties on the ground. From all walks of life, left to right. The Loya Jirga could have a representative national political system for 24 months or so that could lead to an election. All of this could happen if the neutrality of Afghanistan is sought internationally at the UN and a representative political structure inside the country is established.“

As a response to a question from the audience, Heela Najibullah pointed out, “f you look at the history of Afghanistan, the times when there was peace and there was no war were the times when Afghanistan was neutral or adopted the path of neutrality.“

Agreeing on the points Jared Rowell and Heela Najibullah made, Horia Mosadiq went on to describe the collapse of the Afghan state as a “collective failure“ of the international community and Afghans as well. “Now we are dealing with a regime that is not only a gender apartheid regime, that does not simply recognise women as human beings, but we are dealing with a government that simply does not recognise anyone who opposes their way of life, which they have elected and imposed on over 35 million people.“

Horia Mosadiq went into details of how the Taliban are a government that is built on violence, discrimination, and worst of all, a government that does not recognize anyone aside from its followers. Shading light on the drastic changes under the Taliban, she sees the achievements of the last 20 years now completely lost.. In the last 20 years, women were ambassadors, ministers, MPs, journalists, leaders, entrepreneurs, teachers, students and under the Taliban, „now they seem to be ‚nobody‘, they become persons who have no identity. Women disappear, are tortured, beaten and held in detention centres just for peacefully protesting for their right to access education and work.“

“I, as an Afghan, would say that I feel so much betrayed by everyone. From the United Nations to the US, to the Europeans, to almost everyone.“ Concluding the discussion, Mosadiq criticized Europe’s role while also pointing out to Norway and Switzerland for hosting the Taliban delegations in the last months. According to her, any engagement of the international community with the Taliban must be conditional. After 40 years of war, Afghanistan has millions of widows and there is no one to look after them if they are not employed. Conditions such as the return of women to their jobs, the hiring of women by aid agencies, etc. are just a few examples of what demands could be made.