A binding registration is required: fanizadeh@remove-this.vidc.org

(born in Pakistan), environmental researcher and expert on climate change, Boston University, U.S. He was one of the co-authors of the 3rd and 4th Assessments of the Intergovernmental Panel on Climate Change (IPCC), for which he received the 2007 Nobel Peace Prize as part of the research team along with Al Gore

is leading on a new project looking into climate and mobility in Africa at the Mixed Migration Centre, Geneva, Switzerland

Following the panel discussion "Climate crisis boosts displacement" VIDC and IIASA are organizing the workshop to deepen the knowledge into the topic and to get concrete results for further work.

2 G-rules apply to COVID-19 (vaccinated, recovered).
Due to the Covid 19 pandemic, there is a limited number of participants.

A binding registration is required: fanizadeh@remove-this.vidc.org 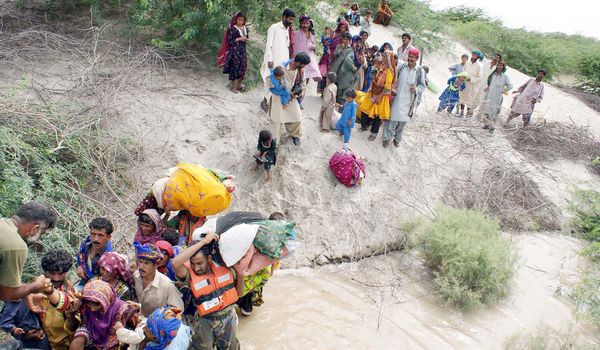 The event will explore how the climate crisis affects conflicts and displacement in the Global South. What would be necessary adaptation strategies for disaster risk reduction in the poorer and most vulnerable countries of the Global South? How can high-risk, low-capacity countries be targeted for assistance to better protect themselves from the impacts of climate change? What is the status quo on climate change and displacement? What is the link between conflict and the climate crisis? Who is particularly affected by displacement? Is climate-related displacement female?

Under the motto "Uniting the world to tackle climate change", the 26th UN Climate Change Conference (COP26) will take place in Glasgow from 31 October to 12 November 2021. The conference is taking place against the backdrop of a climate crisis that is progressing ever faster and with ever greater consequences - as the forest fires in the Mediterranean regions and the floods in Germany this summer have shown very clearly. The United Nations Intergovernmental Panel on Climate Change (IPCC) assessment report of August this year also speaks a clear language: the report assumes that climate change will increase in all regions in the coming decades. At 1.5°C global warming, there will be more and more heat waves, longer warm seasons and shorter cold seasons.  At 2°C global warming, heat extremes would become more frequent and critical tolerance thresholds for agriculture and health would be reached, the report said.

People in the countries of the Global South are particularly affected by the short-term and long-term impacts of climate change. In a recent report, the World Bank projects that up to 216 million people will be internally displaced due to climate change by 2050. These people are less able to protect themselves from frequent and more intense weather-related events, such as floods, fires, droughts and storms, and are increasingly forced to leave their places of origin and seek new homes.

(born in Pakistan) is an environmental and development researcher and expert in the field of climate change. Najam is Professor of Global Public Policy and Environment, and Dean of the Frederick S. Pardee School of Global Studies at Boston University in the United States. Earlier he was the Vice Chancellor of the Lahore University (LUMS) in Pakistan. In 2008, UN Secretary-General Ban Ki-moon appointed him to the United Nations Committee on Development Policy. Najam was also one of the co-authors for the Third and Fourth Assessments of the Intergovernmental Panel on Climate Change (IPCC); work for which the scientific panel was awarded the 2007 Nobel Peace Prize for advancing the public understanding of climate change science.

is the Program Director of the International Institute for Applied Systems Analysis (IIASA) Program on Population and Just Societies (POPJUS) and Acting Research Group Leader of the Migration and Sustainable Development (MIG) research group. Since 2017, she has also been Director of Population, Environment and Sustainable Development at the Wittgenstein Centre for Demography and Global Human Capital a cooperation between IIASA, the University of Vienna, and the Austrian Academy of Sciences. Muttarak's research focuses mainly on the reciprocal relationship between population and the environment. Her current research projects include: 1) Differential impacts of climate variability on human health, migration and child welfare, 2) Climate change attitudes, voting patterns and environmental behaviours, 3) Modeling and forecasting future vulnerability and adaptive capacity.

4Mi Global Coordinator, joined the Mixed Migration Centre as the Global Coordinator of the 4Mi project in May 2019, and is leading on a new project looking into climate and mobility in Africa. Jane was previously a researcher and managing editor at Geneva’s Graduate Institute of International and Development Studies, and analysis team coordinator at ACAPS. She has also worked with a number of other international NGOs and think tanks.

is a DOC-ÖAW Fellow and a researcher at the Institute for Social Anthropology of the Austrian Academy of Sciences. For her PhD project at the University of Vienna she investigates how (im)mobilities relate to environmental change in Indonesia. She has previously worked on transnational migration, gender, and social protection as a researcher and practitioner.