Afterwards we invite you to a drink and informal exchange.

The panel discussion is part of the networking conference "Syrian Women in Europe Building the Future". 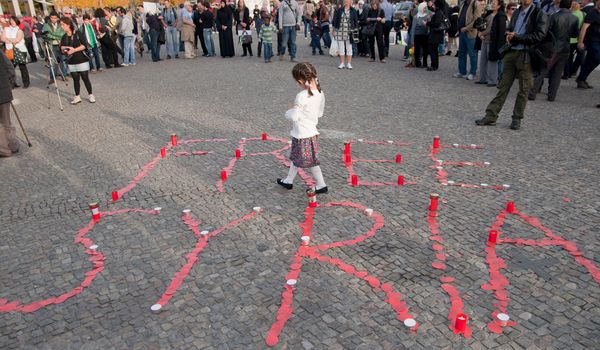 Since 2015, Syrian civil society in Europe has been strengthening, developing and becoming more organised. It has, however, long been time to unite these efforts and build more cohesive Syrian female activism in Europe in order to enable Syrian women to effectively participate in building Syria’s future.
Several women-led organisations have emerged in Europe, initiated by successful female community leaders. This development offers an important opportunity which can be built upon. The speakers will exchange personal experiences and outline the current efforts of Syrian women in science, politics, and civil society in Europe, Syria, and its neighbouring countries.

Despite all circumstances and the attempts to systematically marginalize and exclude Syrian women, they still play an essential role in resolving the conflict and shaping the future of the country. The concerns of Syrian women today are inseparable from the major issues facing Syria.
Syrian women have carried a heavy burden. Living with armed conflict, systemic oppression, a global pandemic and a massive economic crisis, many women have become victims of human rights violations and crimes, including crimes of sexual violence.
On its path to liberation from political dictatorship, Syrian society has yet to relinquish its patriarchal structures. Syrian women share their country’s sacrifices, burdens and responsibilities, however, they continue to struggle to participate in decision-making processes. Gender equality and women's rights, as well as sustainable peace, cannot be ensured without the active and effective participation of Syrian women at all levels.
Active Syrian women however face many challenges; either simply because they are women, and/or because the dynamics of the Syrian conflict are replicating in their new societies. These factors can lead to disengagement, or the isolation of Syrian women from public spaces.

This panel discussion is part of the conference “Syrian Women in Europe Building the Future”, which takes place in Vienna from 6-7 October 2022.

is co-founder and deputy director of IMPACT - Civil Society Research & Development. Hawash studied economics and holds a MA in Peace and Security. She participated in the peaceful uprising in Syria and since 2011 has been active in civil society and grassroots non-violent movements. Hawash is now based in Germany and has participated in multiple conventions on Syria as a public speaker. She is also a board member of the Verband Deutsch-Syrischer Hilfsvereine (VDSH).

is the founder and director of Badael and has 14 years experience in human rights, peacebuilding, and sexual and gender-based violence. Before founding Badael she worked in Syria for the UNHCR, responding to and preventing sexual and gender-based violence in refugee communities from the MENA region. She co-authored several research papers with a focus on civil society, peace, and women’s activism.

Nivin Alhotary (via Zoom from Syria)

comes from Eastern Ghouta, in the suburbs of Damascus and was forcibly displaced to the countryside north of Aleppo. She studied and practiced business management before becoming chair of the board of the Women Empowerment and Support Unit.

is a political scientist and is the division director of VIDC's Global Dialogue Department. Her focus is on the Arab region. As a gender advisor, she works on the implementation of the Women, Peace, and Security agenda.