Syria: In the interest of justice

Syria: In the interest of justice 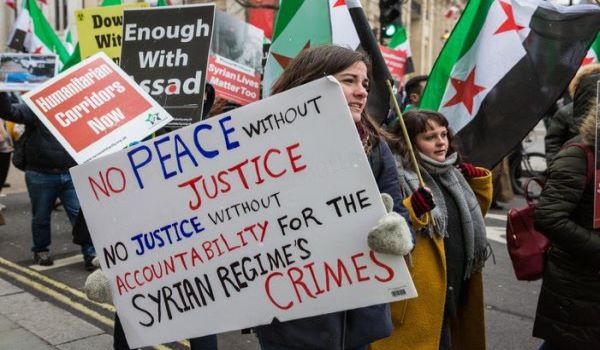 When more than 50,000 photos of a Syrian defector became public in 2014 under the alias "Caesar," the extent and systematic nature of the torture and killings of detainees under the government of Syria's President Bashar al-Assad became apparent. These images, taken in Syrian government detention facilities between May 2011 and April 2013, form an important basis for criminal charges against high-ranking Syrian intelligence officials brought in Germany in 2017.
These proceedings can be conducted on the basis of universal jurisdiction in third countries, such as Germany or Austria. In 2018, the first arrest warrants were subsequently issued, and in February 2021, the first conviction was handed down.
Despite these successes, the prosecution of war crimes and crimes against humanity in Syria remains a weak point in the international fight against impunity to this day.  Torture, systematic sexual violence, and years of enforced disappearances are crimes that were commonplace in Syria even before the 2011 uprisings. According to the Syrian Network for Human Rights (SNHR), an estimated 15,000 people have died from torture and at least 100,000 Syrians have been forcibly disappeared since the war began in 2011.
For many Syrian survivors, victims and activists, the European national courts and the principle of world justice are the only hope for a trace of justice.
Austria is also investigating perpetrators who participated in war crimes and crimes against humanity in Syria.  Here, too, the charges were prepared and brought in cooperation with representatives of the Syrian diaspora, because some of the victims of the Syrian regime or witnesses were able to flee to Austria.
Why are these proceedings taking place in Germany or Austria and what is the current status of the investigations? What is the role of the Syrian diaspora in the criminal investigations and what would justice look like from their perspective? What is the significance of such proceedings for victims and survivors? The event will also address sexualized violence against women as an instrument of systematic oppression and the role of Syrian women as witnesses, activists and peacebuilders.

is the senior project manager on national trials of grave crimes for the Open Society Justice Initiative. Prior to joining the Open Society Foundations, Witte served as external relations adviser to the president of the International Criminal Court. Before that, he served as political adviser to the prosecutor of the Special Court for Sierra Leone, where he developed strategies for bringing then-fugitive former Liberian president Charles Taylor into the court’s custody. He also worked at the Coalition for International Justice in Washington, D.C., on the political strategy leading to the arrest of former Serbian president Slobodan Milosevic and his transfer to the International Criminal Tribunal for the former Yugoslavia.
He has authored several Justice Initiative publications, including Options for Justice: A Handbook for Designing Accountability Mechanisms for Grave Crimes.

is President of the Austrian Marshall Plan Foundation and a member of the Advisory Board of the Centre for the Enforcement of Human Rights Internationally (CEHRI). Dr Petritsch was Secretary and Press Spokesman to Federal Chancellor Kreisky from 1977-83, Director of the Austrian Press and Information Service in New York from 1984-92, Ambassador in Belgrade from 1997-99, EU Special Representative for Kosovo and EU Chief Negotiator at the Kosovo peace negotiations in Rambouillet and Paris in 1999. He was High Representative for Bosnia and Herzegovina from 1999 to 2002, Chairman of the International Succession Commission for Yugoslavia in 2001, Austrian Ambassador to the UN in Geneva from 2002-08 and to the OECD in Paris from 2008-13. He also teaches at the universities of Vienna, Harvard and Berkeley and is the author of numerous works, most recently Epochal Change Our Digital-Authoritarian Century.

is an activist, a journalist, and a survivor from detention.  She left the country on 9 July  2013, exactly a week after her father was forcibly disappeared by the regime in Damascus. She moved to Turkey where she worked as a journalist for various media outlets. In 2016, she moved to Berlin, Germany where she graduated at Bard College in Arts and Aesthetica in 2020. Like many of other families, Wafa doesn’t know what has happened to her father, Ali Mustafa.  In her advocacy, Mustafa covers the impact of detention on young girls and women and families."

is a Syrian human rights defender and lawyer, Graduate of the Law University in Damascus. He was elected as Commissioner of the International Commission of Jurists- ICJ, he is one of the most important human rights defenders in Arab world who has been awarded over 12 international awards including "Roland Berger Human Dignity Award", “UNESCO/Guillermo Cano World Press Freedom Prize , “Four Freedoms Award” and Bruno-Kreisky-Preis.
Darwish worked for years as a human rights defender in Syria, which caused him detention several times last time was between (2012-2016), his work concentrated to follow up on the legal status of conscience prisoners in various areas of Syria. He is the founder and director of  the Syrian Centre for media and freedom of Expression (SCM).

is a Syrian lawyer and Human rights activist. She is a research Fellow, International Crimes and Accountability Program in The European Center for Constitutional and Human Rights E.V.(ECCHR).  She is a co-founder of the Syrian Women’s Network. Ms. Seif is also co-founder of the Syrian Women Political Movement. She is Chair of the board of directors at TDA: Supporting a Democratic Transition in Syria.  Before the Revolution, she was a member of Damascus Declaration from 2007-2012.

works as an independent lawyer in Vienna. From 2016 to 2017, she was State Secretary at the Federal Chancellery for the Civil Service, Digitisation and Diversity. After that, she was a member of the National Council until 2019. Between 2012 and 2016, she was a member of the Vienna City Council and the Vienna State Parliament. Muna Duzdar has made several political study trips to the Middle East and North Africa (Jordan, Palestine, Lebanon, Syria, Tunisia, Algeria, Morocco). She comes from a Palestinian family.