#3: Life under the Taliban

#3: Life under the Taliban

"The university is closed. Go home!"

Nazilah Jamshidi is a gender equality and human rights specialist involved in Afghanistan’s development and democracy processes for the past decade – has worked for the UN, USAID, the IFRC, and various other international organizations. A native of Afghanistan, Jamshidi is now an M.A. candidate at Columbia University. 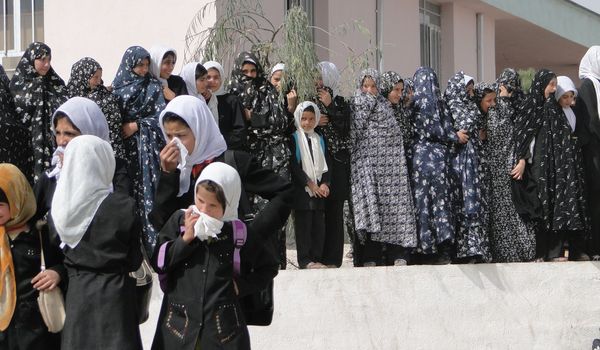 In Afghanistan, women and girls are denied higher education. Girls from the 7th grade onwards and female students are affected by exclusion. Gender expert Nazila Jamshidi spoke with the sisters Atena and Mina in Herat, whose dreams as students were shattered overnight.

Under the title "Life under the Taliban", VIDC Global Dialogue launched a series of articles on the situation in Afghanistan after the Taliban seized power in August 2021. Women and men from many different parts of the country and with different perspectives and realities tell us their stories.

August 15, 2021, will be forever etched in the world's conscience as the date that the Islamic Republic of Afghanistan collapsed. However, for the women of Afghanistan, the day changed their lives in a way they had feared, but never imagined would become their reality. It is the collapse of two decades' gains in human rights, freedom, and education. Last summer marked perhaps the most tragic era of Afghan women's stories yet.

Within a society always at war with itself, and a deeply divided nation, in the decade that I lived in Afghanistan — 2005 to 2016 — I witnessed multiple women heartbroken but determined, a combination of traits found everywhere in the country, from west to east and from north to south. Even when the conflict had become psychologically suffocating, I saw women going to work, to the shops, and to learn, keeping their everyday lives functioning as smoothly as possible. I saw women going to the American University of Afghanistan in Kabul only days after the horrific attack in August 2016, taking several students' and professors' lives and leaving dozens wounded. An attack which took a nine-hour siege, on campus and inside the classrooms, in front of students’ eyes. They sat, still hopeful, in a room that smelled of everything malignant in their lives. I saw women on the evening of Valentine’s Day buying bouquets of red roses, heart-shaped balloons, and candles celebrating love in the midst of increasing terrorist attacks in the city of Kabul. I saw women convoy their children to school when going to school could get them killed.

Upon Afghanistan’s present return to a repressive past, women face deep anxiety as the Taliban continue to impose restrictions on women and school' gates remain closed. From thousands of miles away, I talk to women in Afghanistan; I listen to their stories. The stories, upon hearing them, filled my heart with joy just a few months ago turned to stories of despair and sorrow. They are the stories of two sisters, Atena and Mina from Herat, who reflect on what it is like to be a woman under the new Taliban regime. Atena and Mina's lives turned from progress and possibility to a state of constant fear and anxiety, ever since Taliban gunmen prevented them from entering Herat university's gates.

Atena, 24, was just two months away from graduation from the School of Agriculture and Economy. “The last four years in Herat university were the most beautiful time of my life. Those four years gave me knowledge and skills that made me independent economically and intellectually,” says Atena.“ I witnessed my own dreams coming true when I got my first job, through which I could practice what I learned and support a family," she continued. “I was very close to graduating with honors and making my family proud.”

A day after the fall of Herat to the Taliban, Atena went to university with her younger sister, Mina, hoping that was another typical business day. “I found the Taliban's gunmen in front of the gate. My voice and heart were trembling when I asked the men to let us in,” says Atena. “The university is closed. Go home! One of the gunmen said to us in Pashtu, pointing his gun at us,” says Atena. At the tip of that gun, Atena “saw the end of my freedom, rights, learning, and happiness.”

Atena later received an email from the organization she worked in, noticing the suspension of her job. “I lost both my professional and educational career in the same bloody day,” she explains with a quivering voice. Frustrated from the losses and lack of response from the de facto government. Atena, with her sister, Mina, joined other female protesters to demand her rights for education and employment. “I stood in front of the Taliban members and chanted for my rights with the loudest voice. But it was as if the men's ears were deaf to the voices of women,” Atena continues.

“Herat, a place where I could once go to cafes, restaurants, and parks with my friends and classmates, has turned to a place where it felt as if I knew no one. My vibrant city became completely anonymous, a place I cannot recognize anymore,” says Atena. “In the last six months, I get out of bed when I have no motive and desire to do so. Sometimes I like to think of my work, helping female farmers be economically independent. I repeat their names, their stories, and their dreams to myself. I want to remember everything about my work and those women.”

For Atena and millions of other women like her, there is no way out. Their hopes are trapped behind locked embassies' doors, closed borders, and dysfunctioning passport departments. “We hear about evacuation lists. But, they are under the control of those who have power,” says Atena. “Everyone has turned their back on people like me. We were the ones whose progress everyone was showing off as if it was their own achievement.”

Mina, 21, was a second-year student at the School of the Economy of Herat University and a member of the Women’s Cycling Team before the Taliban regained power in her home city. “When I saw girls riding on TV, I wanted to join them. It took me months to convince my father to allow me to join the team,” says Mina. With 24 women cyclists, Mina rode in several events, including Herat’s Day (April 14 is named the day of Herat by its citizens) and the opening of Lajaward Way, a new road for transports to Azerbaijan. “I put my feet on the pedals to demonstrate against gender discrimination, violence against women, and war,” explained Mina. “As a female cyclist, I was harassed and mistreated, especially by those for whom a girl riding through the streets of the city is a taboo. But, I would feel the freedom and independence when riding in a male-dominated society and in a city where Mawlawi Ansari preached against women’s freedom every Friday.” Mawlawi Mujib Rahman Ansari is a religious clerk and the head of the Gazergah mosque in Herat.

“When the Taliban conquered my city, we left our house. My father blames me for the family’s displacement,” said Mina. “I take the blame. My passion for riding, education, and fighting against discrimination left us in an uncertain situation. I recall the words I used to convince my father to pedal: we live in the 21st century, we should break the taboo, we live in the era of gender equality and democracy. I was so naive,” Mina reflects.

Before going to university, Mina traveled to remote villages with her family, where she saw the severe deprivation of basic human needs. Thus, she decided to study economics and find a way to get people out of the poverty cycle. “I went to university because I wanted to help those suffering from lack of food, sanitation facilities, health, shelter, and education,” says Mina.

Now, each day Mina, her sister, and millions of other Afghan women like them wake up in a country where human life, dreams, and aspirations have faded. Their days hang around disperse, where the pursuit of dreams and happiness becomes reckless and endangering acts. The everyday lives of women under the Taliban rule, which demonstrate the human impact of deprivation, rarely make it into news stories. Agony is etched in the voice of every woman I speak with. At their most desperate, some female university students keep their days moving with knitting, tailoring, and embroidering at home, while others seek refuge in neighboring countries, like Iran.

I recall these women once eager to learn modern skills in learning centers. I remember them exhibiting their artworks of Persian and Islamic art in the museums and cultural centers. I recall the crowd of young girls in their white scarf at schools. Once I knew these women resolute, uncompromising, and inspired.