One year of resistance against Taliban rule

Monday, 3 October 2022, 17:00
Dachfoyer in the Parliament in the Hofburg (entrance at Josefsplatz)

Please register on the Parliament website. (Binding registration is compulsory)

The detailed program with exact directions and registration information can be found here.

Maniza Bakhtari, Ambassador of the Islamic Republic of Afghanistan to Austria

The price of protest: Young women mobilise for a future without violence

The event will be followed by a reception and a joint exchange.

The event will take place in presence and will also be streamed live. Here you can access the livestream. 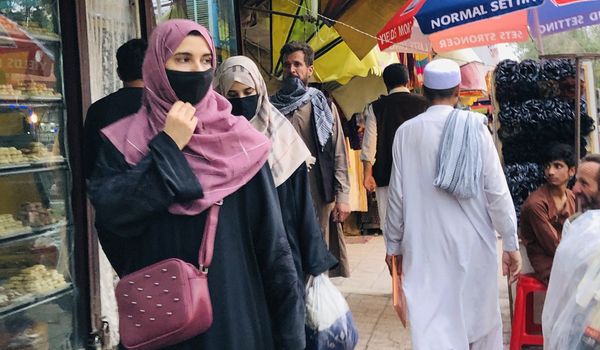 The Second President of the National Council, Doris Bures, together with VIDC and Women without Borders, invites you to an evening event to mark the one year anniversary of the Taliban's seizure of Afghanistan.

Since the Taliban became Afghanistan’s de facto government in August 2021, the living situation for women and girls in particular has become extremely precarious. Increasingly, they are being forced out of public life into the confines of their homes and subjected to ever stricter restrictions.  For this reason, Afghan women are fighting for their fundamental human rights, including the right to education, freedom of movement and economic security. The transfer of power to the Taliban not only affects Afghan women in Afghanistan but also those who have sought refuge for themselves and their families in exile.

The young women who are fighting for law and justice, as well as for democracy and freedom both in Afghanistan and in exile today are the daughters of the same generation of women who risked their lives to sustain schools, education and health services throughout the first Taliban era. It is with courage borne of despair that these women raise their voices.

Together with Women without Borders and the Vienna Institute for International Dialogue and Cooperation, the Second President of the National Council cordially invites you to hear the inspiring stories of these brave fighters for democracy, equal rights and the protection of women.

Please register on the Parliament website. (Binding registration is compulsory)

is an Afghan women's rights activist. In 1998, she founded the organisation, Voice of Women (VWO), which began by teaching girls to read and now provides women with shelter, counselling and vocational training. Until the fall of the Taliban in 2001, the organisation was forced to work in hiding. Additionally, VWO runs women's shelters for women and girls affected by violence; at present this is being carried out underground. Pakzad was evacuated to Germany.

is a women’s rights activist and the founder of Young Afghan Women’s Movement in Afghanistan. Husna has worked tremendously for civil and political rights especially for the promotion of the political rights of Afghan women. She has a B.A. Honours in Political Science and Sociology from Jamia Millia Islamia University in India.Husna Jalal is the associate founder of Freedom Message Newspaper and a board member of the Afghan Women Empowerment and Capacity Building Center (AWECBS). Her leadership and work were recognized and appreciated by the 5th World Women Leadership Congress & Award by the “Women Super Achiever” award in 2018, India. After the fall of Kabul in August 2021, Ms. Jalal was forced to go into exile.

A native Afghan who was brought up and educated in Austria, Masomah Regl founded the association “Fivestones” in 2018 with the idea of giving an official framework to her diverse volunteer work in the field of integration. A particular focus is on the integration of Afghans into the Austrian labour market. The name "Fivestones" refers, among other things, to a game requiring special skills that is particularly popular with Afghan children.