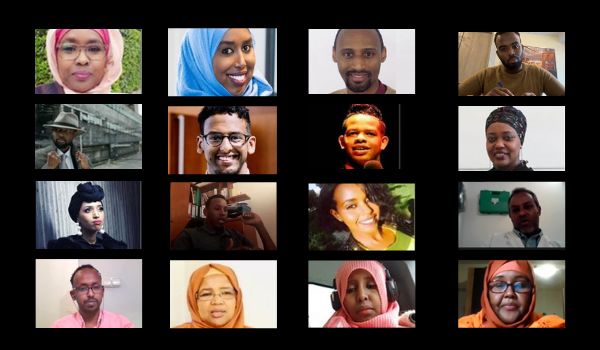 Vienna, October 2020. Moderators Suad Mohamed and Jamal Mataan welcomed the participants. They asked each speaker to share their personal backgrounds and the natures of their engagement as well as the challenges they are facing. They explained that the Zoom meeting – with around 45 participants - is a preparatory event for the coming Somali diaspora networking conference in Vienna, to be held from October 8 – 10, 2020. The conference is organised in cooperation with, and on the initiative of, the VIDC – Vienna Institute for International Dialogue and Cooperation.

Jawaahir Daahir is the CEO of the Somali Development Service in Leicester (UK) and the Chair of the Global Somali Diaspora Board (GSD).  The GSD is a platform for the exchange of knowledge, providing both support for people who return, and assistance to the reconciliation process in the “homeland”, as she - as member of the elder generation - calls Somalia. The GSD was founded in Istanbul in 2014 as a global platform for Somalis. Further conferences were held in Kigali (2015), Mogadishu (2016) and again in Istanbul (2019). The 5th GSD conference, planned for Doha in 2020, had to be cancelled due to the COVID-19 pandemic. An online meeting will take place however on November 28-29. Today, the GSD has representatives around the world, and organises annual meetings in the UK and other countries, including the US, Australia and Scandinavia. These gatherings both look into developments at the national level and celebrate the Somali language

Zak Salad is a British Somali Filmmaker, currently producing a documentary about the prevention of “Tahrib” (Irregular Migration). While looking into the subject of taking an humanitarian approach to migration, Zak focused on international human rights and the responsibilities of states in order to further deconstruct the “Tahrib” Ideology. Mr Salad's research was conducted in Nairobi, Vienna, Oslo and London, where he communicated with elders and youths to formulate a solution to combat this issue. All Zak Salad’s projects highlight the topic of inclusion and decision-making in the filmmaking world.

Mahad Salad Abdi  was born and raised in Belgium, and also lived in England for a short period. He runs his own show, called TheMahadShow, where people of African descent present themselves as role models to inspire other young Africans on their journeys. Mr. Abdi took part in the BLM movement, focusing in particular on Belgian history. He also organised a demonstration and took part in round table discussions about racism. He said many Somalis living in Belgium have a tribal mindset and that communication within the community is difficult because people live isolated from each other and there are few opportunities to meet. More events are needed to bring people together. He concluded that Somalis need to represent themselves better.

Mohamed Mohamud is an author and the founder of Somali Sideways, an organisation which focuses on repositioning negative images and stereotypes of Somalia, in order to change popular misconceptions about the country and its people. Mr. Mohamud explained that two photo books have been published so far, which tell stories about the achievements of the diaspora in different parts of the world. According to Mr. Mohamud, Somalis have online platforms, many entrepreneurs have built up businesses out of nothing, and strong women have contributed to positive changes at the local, national and international level. He wants to portray these narratives through writing and photos.

Support for hospital in Somalia

Batulo Essak is a Somalia-born midwife and nurse by profession, now living in Finland. She is also a civil society leader and noted for her work on multiculturalism and gender equality.  In 1985 she moved to Moscow, and in 1991 she relocated to Finland, where she became an expert in public health and a midwife. Later Ms Essak founded an organisation for migrant women in Helsinki called African Care. In 2002 Ms Essak was part of a Finnish delegation to Somalia. She wrote a proposal to establish a 24-hour maternity clinic in a remote area with minimal access to health services outside Mogadishu. The Finnish Ministry of Foreign Affairs supported another hospital in Somalia, with provision of equipment, management and training implemented by African Care and VMS, a Finnish health technology company. Members of local partner NGOs trained in administration and reporting procedures manage the hospital, while Batulo Essak and African Care’s development cooperation team monitor the project.

Ujuni Ahmed is a human rights activist and the CEO of Fenix Helsinki. In 2020 she was honoured with the Finnish Freedom of Expression Award  from the Finnish PEN.  Ms Ahmed works with women and youth, providing training to help in the fight against gender-based violence, FGM and honour-based violence. Many Somalis are confronted with structural discrimination and racism. Ms Ahmed described how finding a job with “our” surnames is difficult. In 2019, she worked for World Vision Finland as expert on FGM issues. As part of her work, she visited Somalia and reported on violence against children, child abuse, early marriages, and rape. During her stay, she gave talks in many schools, trained nurses, and met politicians, including the Minister of Education in Puntland. Currently, Fenix Helsinki works in Garoowe and Hargeisa in Somalia/Somaliland. It is difficult to reach all girls because many dropped out of school at a young age.

Dr. Abdulahi Jama Abib is a medical doctor in Milano (Italy) and a specialist in tropical diseases. Dr. Abib said that many Somalis went to Italy in the 1990s, then after 2010 the number of Somali migrants increased again. Many saw Italy as a transit country before moving further north. Dr. Abib mentioned that the Somali community in Milano is small which makes communication easier. But during the COVID-19 lockdown, language barriers and mental health problems became more acute and visible.  Dr. Abib is active in an OIM-supported health worker/psychiatrist exchange between Italy and Somalia. Medical doctors from the diaspora train people in Somalia and doctors from Somalia are brought to Italy to further their education.

Edna Moallin is the president of  AMEB, an association which works in the field of mother and child care. AMEB members also assist elderly people, for example when they are hospitalised. Ms Moallin is voluntarily engaged in health and social support for newcomers who arrive by sea, who she describes as “titanics”. She referred to challenges affecting the communities in Italy, especially in keeping relations with schools, inadequate support with mental problems and/or cultural differences. She works with Dr. Abib on the doctor exchange program and they also bring sick children to Italy for treatment.

Jama Mohamed is a Budapest-based consultant with over seven years work experience in the fields of migration and refugees. Previously he worked in Turkey and Pakistan as a researcher into sexual gender-based violence, particularly in Faisalabad and Lahore. He has also worked for the UNHCR, the Kosovo Specialist Chamber and  Special Prosecutor in the Hague which deals with war crimes committed in Kosovo. Mr Mohamed says the Somali community in Hungary is small and the number changes frequently as many migrants consider it to be a transit country. There is little social welfare support, healthcare is expensive, and many migrants find themselves in a precarious economic situation. The Hungarian authorities do not treat them well and there is an extremely negative attitude towards foreigners in general across society. Hungarians have had little exposure to people from other countries and cultures, migration is highly politicised, and migrants are often used as scapegoats.

Naima Ahmed (Slovakia ) works as interpreter and counsellor in Slovakia. She was born and raised in Abu Dhabi, moving later with her family to Slovakia. Like many others, she faced language barriers and difficulties - as a black Muslim - in finding a school. She worked as interpreter for UNICEF supporting newcomers and later for the IOM, assisting Eritrean and Somalian refugees who came to Slovakia. Slovakia is seen as transit country. Most migrants wanted to go to the US, however Trump has banned Somali passport holders from getting visas . As an interpreter, Naima also provides legal advice for irregular migrants. Despite the harsh environment, she was active in BLM events in Bratislava.

Rawda Mahamoud is a Somali and Arabic language teacher in several public schools in Vienna. She also established the Somali women’s organisation, Hooyo, and worked to add a Somali book section in the Vienna public library. As a native speaker, Ms Mahamoud often receives calls asking for assistance in mediation between teachers and parents when problems arise. She also translated COVID-19 information from schools and the government as many Somali children and their parents had difficulties understanding information online. They also did not understand how children had to do homework and had issues with online schooling. The Somali Community had few connections with government institutions: Ms Mahamoud now works with the Educational Directory of Vienna, as well as the midpoint institution, ELMIG, which helps immigrant families settle into their new country and, hopefully, future home.

Fadumo Zahara works as family coach is also an activist for child protection in Vienna, as is her mother. Ms Zahara reported that some families have problems with Austrian authorities and their children are taken away. Sometimes this happens due to language barriers, not with German but with “Wienerisch” which can be difficult for non-native speakers to follow. She helps to educate communities about child protection rights and helps families and young mothers to get their babies back. She sees there is widespread mistrust between migrant communities and local Austrian institutions.

Abdulrahim Ahmed is a community worker and refugee counsellor. He has worked for various Austrian organisations including Diakonie, Caritas and Asylkoordination. He trains youth workers and assists unaccompanied minors while they are waiting for decisions on their asylum applications and/or looking for a family to live with.
Mr Ahmed supports two groups of young adults: one in the 18-21 age group, the second with adults over the age of 21. Each group has different needs:
1)Those between 18-21 years need assistance to:
* find language centres
* get into university
* find scholarships
2) Adults over the age of 21 get the following support:
*Translating documents
*Assistance with hospital visits
*Assistance with visits to government institutions

Ahmed Mahmood is a consultant for family reunification at the Red Cross in Tirol, Austria. Mr Mahmood runs self-organised orientation courses for young people to help them better understand the Austrian way of life. He also organises community events in order to promote the process of integration. As yet there are no formal structures to assist Somali communities, for example with legal services, however an informal digital community has been established.

In chat: Nosotras, Italian Intercultural Association. We are women from all over the world and we work in the fields of human rights and women’s empowerment. In our team we have women from Somalia, including our president Laila Abi Ahmed, and we will be interested to stay in touch with all of you and are hoping this is the first step of a long journey together. I invite you to look at our website (www.nosotras.it). Please feel free to contact us via email. Thanks again and best wishes.

Franz Schmidjell on behalf of the VIDC all participants. He introduced the VIDC (Vienna Institute for International Dialogue and Cooperation), which was founded in 1962 as platform for international dialogue and development cooperation; today, it is a think-and-do-tank to promote global dialogue on an equal footing. Departments include kulturen in bewegung (moving cultures) which organises intercultural activities, and fairplay which promotes diversity and fights against anti-discrimination in sports. He thinks that diaspora communities make a significant impact to the development of their countries of origin, to the well-being of their communities in their countries of residence and also contribute to open societies and the democratic discourse, as the blacklivesmatter movement has shown.  Although the physical conference had to be postponed until 2021, we would like to share good practices of diaspora engagement and discuss these with public institutions.