Women for peace in the horn of Africa (fb) 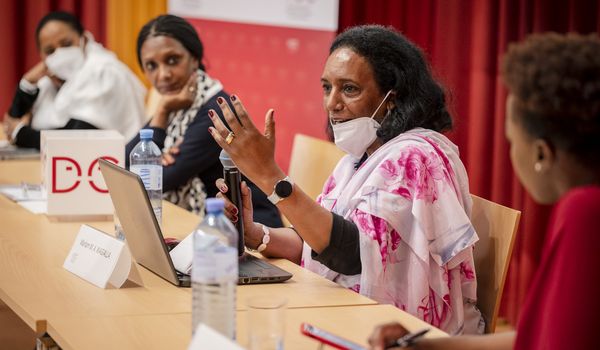 What could be the impact of solidarity of this newly developed women’s network for affected women and children in conflict (or post-conflict) countries in the Horn of Africa region?

A network like this can offer a great platform to ensure that voices of affected women and children are heard, and that victims of violence are visible. For example at NEW we speak only about the situation in Eritrea, but if we are in a network with Sudanese, Somali and Ethiopian women, we can talk in one voice, because as you can witness right now, the conflict that is taking place in Ethiopia is affecting Sudan and Eritrea. If we are connected within a network, we can speak in one voice. That is a very important impact that I see. The other issue is that this platform will offer us the opportunity to learn from each other. There are definitely best practices and good practices that can be utilised for our own sakes. Also, the connection with our Sudanese colleagues brings an im-mense amount of added value to us, because we know there are a lot of Eritrean refugees in Su-dan. Our Sudanese colleagues will be able to connect us with the right people and right initiatives to support our cause. If we work only as Eritrean women, our work is always limited. But if we work across borders, we always have access to different possibilities and resources.

We know that women become victims, like we are witnessing in the Tigray region. The experience of women in conflict is very different to that of men, so conflict is not gender neutral, as many people want to believe. Conflict has a gendered aspect, especially in totalitarian regimes. Women have no say and when conflict breaks out women are the first to become victims. Therefore, it is very, very important to be aware of what conflict does to women and children and vulnerable groups, and that’s what 1325 is looking at. Thus it is very important that women, from day one, if there are peace negotiations taking place, that they are involved, to be able to bring their experiences in conflict, and also in negotiation and mediation. So 1325 is a very important tool for us, that unfortunately is not used and utilised by many actors today. But when it was developed many years ago, people were very hopeful that this would bring changes.

What do you think, how might the newly founded network affect the peace efforts and peace consolidation in the region?  Will it bring a change? As you said, 1325 should be more utilised by key actors, but most of these actors are men. Do you think it might also bring a kind of power shift in negotiation teams?

I guess, the first step will be visibility. For now, we don’t “exist”, or we “exist” in fractions. But if we are in groups, and in a network, we will definitely be visible to push for certain things, and also be available to reach out to important actors. For now, we are not capable of reaching out to the different actors because we are not coordinated. But it is, of course, a longterm thing. Now we are at the beginning, at the conceptual stage. But once this network is established and operational, I strongly believe it will have an impact on any transformation that is taking place in the region, especially in post-conflict situations.

Isn’t NEW already doing this work as a network? As you said, you are not coordinated yet, but NEW already is. Has NEW had an impact on the peace process in the region, or in Eritrea particularly?

So NEW is basically a so-called diaspora network. That makes a big difference. But we know from other diaspora networks, like the one for Afghanistan, where the war has been going on for over 40 years now, that these kind of networks are very important for local communities and for women’s empowerment within the country. In addition, they are crucial for the peace negotiations since they are also trying hard to engage and involve more women.

As long as the situation is dangerous for women, of course it’s very important to have diaspora-based voices to amplify the voices of local women. But it needs to go hand in hand. So this is what we all need to work at. In the Eritrean context, unfortunately it’s impossible to work from inside Eritrea right now, if you are against the government, or if you speak out for human rights, your life is in danger. So the only option that people have is to work in exile. But there are countries like Sudan, where a very positive transition is happening, and maybe people can be based in Sudan or in Kenya. In Ethiopia it is probably also very problematic right now, but this initiative should enable us to become a strong movement, not an Eritrean movement, but a movement from Eritrea, Sudan, Somalia, Ethiopia. And maybe other countries like Djibouti might join us at some point as well.

There is a lot happening in the Horn of Africa right now, from transition to terrible conflict. For me, this offers the momentum to create a unique initiative to respond to the emerging situation. In all countries of the Horn of Africa, women’s voices are marginalised. Therefore, I guess that European countries or the EU can support women to build their capacities, for example through trainings to become mediators or advocates for peace. Funding is a major problem for all of us. If you look at NEW, we do everything entirely from our own pockets. So far we are all volunteers, therefore we have to have other jobs to survive. So whatever initiative is set up, it needs to be professionalised. It cannot be operated by volunteers. It has to have professional coordinators and project officers. It has to be an institution with sufficient funding, that can be taken seriously by different entities. Funding is an issue, as well as capacity building. These, I think, are the most important things (14 June 2021).