Afghan and Iranian Women Fight for Their Rights

Afghan and Iranian Women Fight for Their Rights

“Women, Life, Freedom” a new revolutionary era in Iran. Why is it important to talk about recent women's protests in Iran? By Homa Bazafkan, 23/1122

* For security reasons, the author uses a pseudonym. 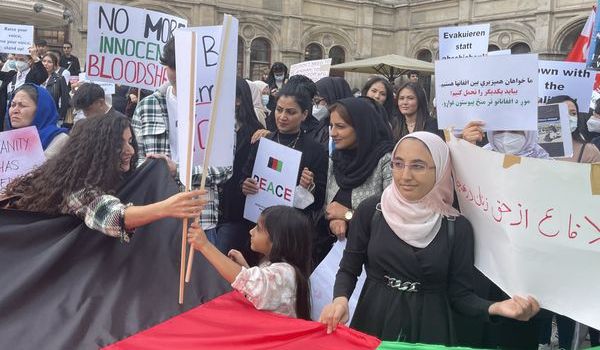 Since the collapse of the Islamic Republic women have been erased from the political and social spheres. However, women have been constantly demanding their rights through protests on the streets, rallies, and social media campaigns. Nowadays they are trying hard to change their circumstances and to shape the future of their country and the next generation.

From the women's rally in Herat a few days after its fall on August 12, 2021, chanting "don't be afraid, we are all together," to "food, work, freedom," in Kabul, women demanded their rights and the protection of their advances they had achieved over two decades of tireless work. Observing misogynous measures and forceful implementation of oppressive policies against women, such as covering their faces, banning them from walking in public parks, and traveling without a male accompanying/a male family member, Mahram, women have come up with numerous methods of protesting. They have been standing for their rights alone and without a single Afghan man accompanying them.

The rise of militant misogynist conservatism in the name of religion and culture in Afghanistan, where gendered contestations have recreated a crucial role in defining people's national, cultural, and social identities, is constituting another gender apartheid regime. Under the Taliban regime, women are facing the same sexist and discriminatory rules as they did in 1990s. The transition from a “gender apartheid system” to a non-sexist constitution and public laws, which focuses on values like equality, human dignity, and advancing human rights and freedom, seems impossible in a patriarchal world, especially in Afghanistan.

Still Afghan women are demanding their rights and taking their issues to the streets. Soon in their neighboring country, Iran, another movement with a shared goal and slogan, "women, life, freedom," began to spread across the country in 2022 after the young Mahsa Amini died as the result of being brutally beaten by Iran's morality police, who enforces the country's compulsory hijab law. Fighting against the most oppressive regime in the contemporary world, Afghan women now amplify their voices and wishes for freedom in the new movement in Iran.

Campaigns in Iran and Afghanistan inspire each other

The two movements share several characteristics and challenges: First and foremost, both Afghan and Iranian women's movements stand against oppressive regimes. The Iranian and the Taliban regime's responses to women's protests have been ferocious, while the protestors have displayed extraordinary courage in their peaceful demonstrations. Women in Iran and Afghanistan have inspired one another in their struggle for emancipation. Women in both countries face extreme gender inequality in various fields due to male dominance, the intertwining of religion and culture, and the existence of cultural and religious patriarchal that constructs the power of resistance to equal rights. The Iranian regime and the Taliban, through their harsh interpretation of the hijab, the veil, as a religious symbol and its connections with notions of shame, honor, and identity, use the veil as an indicator of solid convictions regarding gender relations or a sign of religious devotion. This is just one manifestation of how women in Afghanistan and Iran face fundamentalist interpretations of Sharia.

The Afghan and Iranian women's rights campaigns are a substantial inducement to one another. The Iranian protest movement is a true demonstration of the critical role that men can play in standing in solidarity with women and the popularity of the movement. Similarly, the Afghan women's movement depicts that women can resist misogynistic male rulers with or without global attention and support. Even though not widespread, the Afghan women’s campaign has prevented a regime without respect for human rights from being recognized worldwide. They show that there is strength in women's campaigns, even in a small crowd. Afghan women's non-violent resistance provides an example of taking fearless and bold steps toward breaking gender apartheid and moving on the complex path to a non-sexist constitution, something the western power regards as impossible.

The Afghan and Iran societies are tight not only by culture and religion but by the oppression they experience in their daily lives and the challenges they face in the quest for freedom. The tragic death of Mahsa Amini, followed by widespread protests, connected women of two communities against all forms of oppression and teamed them together over a shared goal, eliminating gender-based violence and women's rights to freedom.

Western powers must put the demand for gender equality into practice

Afghan and Iranian women have struggled for equality and against oppression for centuries, a battle that can be won if supported. At least in Iran, the women's movement is assembled of women and men who fight and sacrifice daily to achieve gender equality and help women to  enjoy the freedom they deserve. It is time for Western governments to apply a feminist lens in their relations with Iran and Afghanistan. With Iran's and the Taliban's discriminatory record on women's human rights and freedom, the Western governments' policy toward Tehran and Kabul must be gender aware. The Western powers need to show a more substantial interest in bringing their important invention for promoting gender equality into action, in terms of feminist foreign policy.

In Afghanistan and Iran women demonstrate that women must prevail, when the loss of freedom is mounting and women's human rights are facing backlashes. Afghan and Iranian women's struggle for gender equality contribute to the strengthening of democracy and democratic values as well as to international peace. Thus, supporting women’s movements is supporting human rights and freedom (16 December 2022).