The Houthi Intellectual and cultural document. The document clearly states the alleged God-given right for Houthis to rule in Yemen, 2012.

Sam for Rights and Liberties reports and statements: Yemen, 22 March 2021.

Bushra Nasr Kretschmer is an economic development expert and political analyst. She is the founder of Sabaa Consulting Services and possesses more than 15 years of international experience in development programs.
The article expresses the author's point of view as a Yemeni. 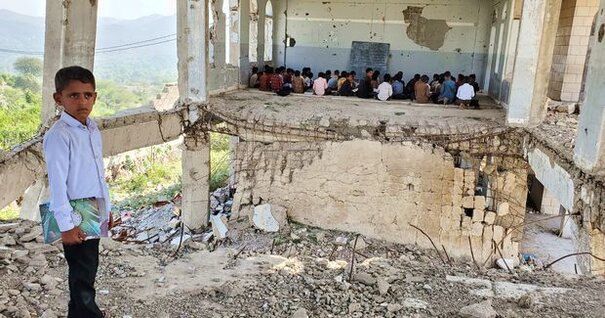 As Yemen enters the seventh year of war, the international players keep confirming their inability to end it. Yemenis keep seeing them trapped in their own bubble bouncing between two statements: a) rethinking peace in Yemen, and b) ending the war in Yemen. As it stands now, the Biden administration has revoked the ‘terrorist’ designation on the Houthi Rebels, a designation that could have been used as a negotiation card to force them to move towards peace. For instance, it could have been used as leverage for the urgently needed maintenance of Safer, the oil tanker floating North of the Yemeni city Al-Houdaydah containing 1,160 million barrels of oil, in order to avoid a disaster.
International diplomats keep discussing unclear solutions for the Yemenis. To put it simply, the western diplomats, due to their insistence on linking the conflict with Iran’s nuclear deal and regional interests, have failed to understand the root causes of the conflict in Yemen, which can be found in the ideology and doctrine of the Houthi.

It started with the Arab Spring

After the revolution in 2011, Yemen had a peaceful transitional period, a successful national dialog and a draft constitution. On 21 September 2014, Houthi rebels took over Sanaa, the capital of Yemen, with an armed rebel force. Ex-President Saleh allied with them and provided them access to all public military storages and to all security, juridical and financial institutions. Houthis since then have waged a fierce war against the Yemenis. On 26 March 2015, a Saudi Coalition operation started support to retrieve the country. On 4 December 2017 Houthis got rid of their ally Saleh.

Who are the Houthis and what do they want?

Houthis, known by Ansar Allah, and their Hashemite family’s allies are a theocratic supremacist group considering themselves superior over 98% of the rest of Yemenis. They believe that they are descendants of prophet Muhammed and have the divine right to rule the Yemeni people by waging what they call a holy war against the Yemenis. This is evidenced by the Houthi Movement’s declaration of 2012 in which they publicly pronounced that “[They] are the chosen race by God and that [They] believe in the Zaidi Hadawee religious political theory which gives them the divine entitlement of ruling the Yemeni people politically, economically, socially, and intellectually” (The Houthi Intellectual and Cultural Document).
In accordance with their religious beliefs, they even imposed a law giving them the right to charge 20% income tax, payable to what they call the “Prophet descendants group” (see video of Safa A. Karman).
Such views contradict a type of governance based on equal citizenship, political or religious freedom and justice. Yemenis suffered for a thousand years in ups and downs until the success of the 1962 revolution when the declaration of the Republic of Yemen and the formation of the first constitution granted Yemenis democracy and the concept of equality among all citizens. Since 2014 Yemenis suffer from the Hashemite race-based supremacy and their Imamates (religious political leadership).

The Houthis have successfully managed to market themselves as an oppressed group defending Yemen, but the reality is completely the opposite: civilians’ brutal killings by them have exceeded 50,000 (Sam for Rights and Liberties reports and statements). Over 10 times more deaths than Saudi-led operations and their airstrikes. More than 10,000 detained civilians, some tortured to death. For the first time in Yemen history, they perpetrated what is called the “black shame” in Yemeni culture: imprisoning, torturing, and raping women (ibid.). They planted more than 1.5 million land and sea mines without maps. The most recent crime happened on 7 March 2021 when they committed genocide by sparking a deadly fire at an immigration center, burning and killing 450 Africans.

On 16 February 2021 the Biden administration revoked the designation of ‘terrorists’ on the Houthi rebels, but the reason given for it was interesting. The designation was revoked due to humanitarian reasons, which would suggest that if the situation was not so bad, the Houthis would have remained labeled as ‘terrorists’. Revoking the designation may solve part of the problem, namely that aid organizations can start dealing with the Houthis again to deliver aid. But would this really help?

The long suffering of international NGOs operating in Yemen shows how the Houthis have been exploiting the peoples’ needs for political gains. Human Rights Watch has even warned them saying that their acts of strangling people fulfil the definition of a terror act. The USAID’s deputy director of the Office of Food for Peace, Matt Nims, said: “The Houthis are blocking aid projects in Yemen, profiting from humanitarian funding and harassing aid workers”.

If their hate and terror statements against westerners and Jews as stated in the slogan "Allah is Greater, Death to America, Death to Israel, Curse on the Jews, Victory to Islam", their attacks on ships in international waters threatening global trade and peace, and especially their crimes against the Yemeni people, are not enough to designate them as a terror group, what more is needed? Their actions are comparable to those of other terrorist groups like ISIS, Al Qaida and Boko Haram. We find similarities between them in killing as well as in their approaches such as brainwashing and recruiting thousands of children. Their anti-semitic theocracy led to the deportation of the remaining Yemeni Jews to Israel and of the Bahai minority to Canada. They are even using these minorities as political negotiation cards.

The international community’s silence towards their crimes is not new as we have witnessed this silence since the Stockholm Agreement in December 2018, an agreement that was made to stop the government’s advancement in Al-Houdaydah port after they were close to defeat the Houthis. The government was under pressure to withdraw for humanitarian reasons as the Al-Houdaydah port is one of the major ports for aid access.
Since then, the Houthis took advantage of the agreement to consolidate themselves, expand and fight Yemenis on all fronts attacking Al Jouf, causing 300,000 people to be displaced and killing hundreds. This year and on the day Biden revoked the terror designation, they advanced towards Marib, shelling the city of 3 million inhabitants with missiles.  Another example of the silence of the international community is Taiz, a city of 4 million residents which did not receive serious international attention as Houthis besieged the city and blocked everything, including aid, since April 2015. The list can go on.

The dilemma in building peace

The international diplomacy and community remain confined to dealing with the Yemeni conflict through the official diplomatic framework. Whereas there are many excellent organizations, experts, jurists and academics inside and outside Yemen that should be included. The pulse of the street should be listened to and it can be found in Twitter hashtags (see further reading).
The second dilemma in Yemen is the Houthi race-based supremacy. They think they have a divine right to wage this war and control the Yemeni people.
The situation in Yemen is dire. The conflict in Yemen should be analyzed independently from of the Iranian nuclear deal where the international community has failed to enforce international law and Security Council Resolutions. Unless we sincerely and seriously endeavor to end the war in Yemen, the repercussions of the ordeal and conflict will affect the entire world because of its very sensitive and vital geopolitical location over international trade and the new silk road. Moreover, any settlement without withdrawing arms from the Houthi militia will only be a temporary solution. The world must stand against the crimes and violations committed by the Houthi militia and criminalize their actions and ideology (22 March 2021).