Defending the Istanbul Convention: A struggle for a future without violence

Defending the Istanbul Convention: A struggle for a future without violence

This article was published in the VIDC online magazine Spotlight July 2021. If you want to receive the quarterly online magazine, invitations and documentations please subscribe here.

Selime Büyükgöze is a volunteer communication expert at Mor Çatı Women's Shelter Foundation, a feminist organization established in 1990 to combat Violence Against Women (VAW). Mor Çatı monitors on the implementation of the Istanbul Convention and CEDAW, and makes policy recommendations to different ministries. She works as a university lecturer and is involved in various feminist campaigns and platforms in Turkey. 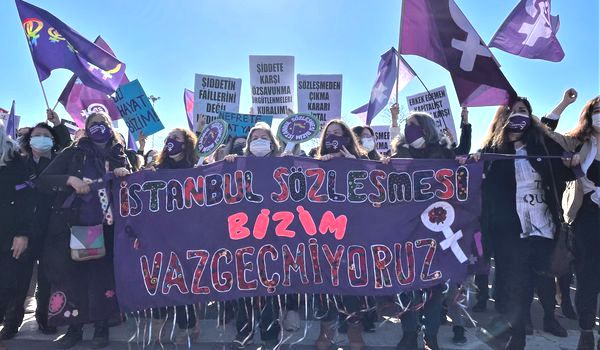 “The Istanbul Convention is ours, we are not giving it up” © Güliz Sağlam

On 20 March 2021, Turkey withdrew from the Istanbul Convention with a presidential decree announced in the Official Gazette at midnight. The Council of Europe Convention on preventing and combating violence against women and domestic violence, better known as the Istanbul Convention, is a human rights treaty aiming at prevention of violence, victim protection and to end the impunity of perpetrators. As the first country to sign and ratify the convention, the withdrawal of Turkey created a shockwave not only in Turkey but also in Europe. For the feminist activists in Turkey this move was expected but still shocking. Back in July 2020, the longstanding efforts of Islamic sects and male groups to withdraw from the Convention was embraced by the government and it eventually created a public debate on the convention. Months later, without any prior notice the decision for the withdrawal from the convention was announced and declared in the official statement that “the convention deviated from its aim because it was manipulated by the marginalized groups”. The illegitimacy of this decision forced them to hide behind false claims that would echo in public opinion. Anti-LGBTI+ discourse and the outcry for the dismantling of families were used to justify the decision.

Many feminists in Turkey have always been critical about the AKP (Justice and Development Party) ruling since 2002 — government’s policies on women and campaigned against the family oriented policies imposed in political discourse as well as in public policies. Although AKP signed and ratified the Istanbul Convention in 2011, strengthening the family has always been the primary agenda for them. 2011 marks the year in which the Ministry of Women was changed into the Ministry of Family and Social Policies. Erasing women from the name of the ministry was not only a symbolic gesture but also a sign of the concentration on family oriented policies and how it will dismantle the implementation of the convention and domestic laws.
The anti-women stance of President Erdoğan is widely known since he frequently shares his thoughts about women. For example, in 2010, he had stated that he did not believe in equality between women and men due to their dispositions and repeated this argument many times over the years. In 2014, he used “fıtrat”, an Arabic word with Islamic roots which describes the ‘pure’ and ‘natural’ human disposition. By using this word, he naturalizes gender roles as if these were an unchangeable law. This happened in the years in which Turkey stated its commitment for the Istanbul Convention, and shows that there was no political will to implement it. The very basic principle of preventing and combating violence against women is recognizing that, as it is emphasized in the convention, it is a manifestation of historically unequal power relations between women and men and family is the core institution in which unequal relationships are reproduced. Thus, the strong focus on family oriented policies and ignoring gender inequality cause the misinterpretation and insufficient implementation of the existing laws and conventions.

As stated in the nation-wide “Research on Domestic Violence against Women in Turkey in 2014”, approximately 4 out of every 10 women have been subjected to physical violence by their husbands or intimate partners. The reports of women’s organizations also reveal that women have been experiencing difficulties in accessing their rights exercised by the institutions such as law enforcement officers, family courts, prosecutors, the Violence Prevention Monitoring Centers, who are supposed to support women in case of violence. Nevertheless, there are no sanctions against these harmful practices. The gap between the laws and their implementation continues to loom large. These problems were also broadly addressed in the Istanbul Convention monitoring report on Turkey and in the European Court’s historic decision, Opuz vs. Turkey, which is followed up by Opuz Group cases. During the corona virus pandemic, already existing problems on accessing rights were deepened. Police officers use the pandemic as an excuse to convince women not to leave or file against the perpetrator. As the pandemic restrictions intensified male violence, women were left unsupported by the state institutions and could only rely on women’s organizations.

Defending the convention in order to promote women-friendly policies

Those who have been campaigning for the withdrawal also state their opposition to this law, arguing it threatens the unity of the family. From now on we expect critical changes on the domestic law which will drastically prevent women from combating violence against women. Anti-convention defenders also promoted hatred against LGBTI+. They openly discriminated against them to legitimize the withdrawal. These discourses cause irreversible cases of violence and make life unlivable for LGBTI+ as they legitimize hate crimes against LGBTI+ and after the withdrawal from the convention there will be no other legal document whereby LGBTI+ living in Turkey are legally taken into consideration. We know that the main intention here is not only to make LGBTI+ the focus of violence, but also to naturalize the discrimination faced by women by eliminating the word gender and, hence, maintaining domination over women through forcing them to uphold traditional gender roles.
Feminists and the women’s movement in Turkey campaigned for the implementation of the convention since its ratification. When the convention was attacked, they took to the streets in more than 50 cities, raised their voices on social media which made the hashtag #İstanbulSözleşmesi on the top of trending topic list for two days, launched campaigns, convened hours of meetings. Just after the decision to withdraw, more than 5,000 women - including myself - were out on the streets in Istanbul and many in other cities: we have been raising our voices ceaselessly because we believe that defending the Istanbul Convention is defending gender equality and our right to live free from violence. We believe that the Istanbul Convention belongs to women, that’s why we keep chanting “The Istanbul Convention Is Ours, We Are Not Giving It Up!”

This is a global attack against gender equality

The discourses against the Istanbul Convention in Turkey, Bulgaria, Hungary, Poland, Slovakia, Czech Republic and in many more, have one thing in common: hatred against women and LGBTI+ in disguise of protecting family, values and traditions. Hence these groups cannot destroy equal rights, they try to cause a public misperception by claiming that the Convention jeopardizes the traditional family structure.  The way these conservatives in Central Europe and Turkey imitate each other proves that it is not a discourse about tradition or national values but about misogyny. These countries have different traditions and values but share right wing politics desiring to stick to traditional gender roles to fuel their neo-liberal policies. Turkey’s official statement referred to EU member states (Bulgaria, Hungary, Czech Republic, Latvia, Lithuania, and Slovakia) which also withdrew from the convention as examples, to support Turkey’s decision to withdraw. This is a strong indicator that anti-gender and anti-convention defenders are not just Turkey's problem but of all Europe. The threat is not only to the women in Turkey but to the acquired rights of women and LGBTI+ in all over Europe. For centuries, women have been battered by men and the last decade is marked by the feminists’ efforts to prevent male violence. The Istanbul Convention is based on the experiences of women who have been subjected to violence and it is not only for women but for everyone who dreams to live as equal individuals in a world free from violence. Our transnational feminist solidarity is the only key to achieve this dream, a world free from violence (18 June 2021).