an interview with Fatima Sadiqi by Helmut Krieger

Silenced (?)! Islamic feminism and social struggles in the Arab world

Fatima Sadiqi is a linguist and specialist in gender and women’s studies with a focus on North Africa and the greater Middle East. She is affiliated with the Universities of Fez and Al-Akhawayne. Among her many publications are ‘Women, Gender and Language’ (Brill, 2003), ‘Women’s Activism and the Public Sphere: Local/Global Links’ (Journal of Middle Eastern Women’s Studies, 2006), ‘Women and Knowledge in the Mediterranean’ (Routledge, 2013), ‘Moroccan Feminist Discourses’ (Palgrave Macmillan, 2014), and ‘Women’s Movements in Post-“Arab Spring” North Africa’ (2016). Fatima Sadiqi’s work has been supported by numerous prestigious awards and fellowships from Harvard University, the Woodrow Wilson Center, the Rockefeller Foundation’s Bellagio Centre, and Fulbright. She currently serves on the editorial board of the Oxford Encyclopedia of African Women’s History.

Helmut Krieger is a social scientist, researcher and senior lecturer at the Department of Development Studies at the University of Vienna, as well as a consultant to the VIDC Global Dialogue. His main areas of research are development policies in war zones, the antagonism between Israel and Palestine, movements of political Islam in the Arab world, critical state theories and postcolonial theory formation. Current publications include ‘Global Inequality and the Debate on Imperial Domination’ (2019) and ‘Traces Not to be Covered. On the Dialectic of Revolution and Counterrevolution in the Arab World’ (2017).

Fatima Sadiqi and Aziza Ouguir (2018) Reflecting on Feminisms in Africa. A Conversation from Morocco. Smith College. 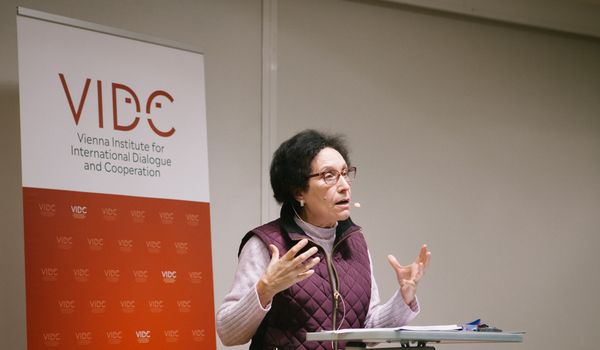 Fatima Sadiqi (FS): Islamic feminisms constitute a very diverse set of feminisms which share one important thing: the reform of Arab family laws that are still based on Islamic jurisprudence. Because family laws are also a state issue, reform does not depend only on the feminists’ movements, pressure from democrats and in particular the push from religious leaders, but also on political will. This is so because the family laws are related to citizenship, emancipation, the legal apparatus and intellectual debates; they have a political, social, intellectual, religious and liberal significance. That’s why their reform is never simple. But Islamic feminism takes it upon itself to target these aspects. Islamic feminists know that it is not easy but they want to involve all these actors in the reform of the family law. If we consider the trajectory of reforms in the Maghreb, we will notice how important specific national and international circumstances are.

In Morocco, for example, the 1993 reforms were instigated by the arrival of political Islam and the ensuing turmoil between conservatives and modernists, and the 2004 reforms were instigated by the 2003 terrorist attacks in Casablanca, as well as the rise of terrorism worldwide in the aftermath of 9/11. These events pushed the king to appoint a new Minister of Religious Affairs, who happens to be a Sufi, which means a lot if you take doctrinal Islam into consideration. Sufism is a characteristic of North Africa, especially to the Maghreb. This Ministry has also been in charge of training annual cohorts of ‘Murshidats’ (female religious guides). This is a type of ‘state’ Islamic feminism.

HK: It’s interesting that you use the term “state Islamic feminism”. It reminds me of what feminists have analysed about state feminism established after the anticolonial struggles in the 1960s and 1970s as a way to co-opt feminist perspectives and movements in order to project the state as the leading societal bloc.

FS: That’s true. So, we have this state Islamic feminism, but we also have Islamic feminism which includes secular feminists, and while accepting the political and religious authority of the king, they seek to separate religion from politics in society at large. Indeed, in retrospect, Morocco witnessed the birth of Islamic feminism at the beginning of the 1980s, when Fatima Mernissi and some male intellectuals and religious scholars started to target serious reform of family law.

HK: Does this synergy correspond to your concept of the ‘centre’ you introduced in several publications? By understanding the centre as ideological and intellectual space in which many voices are articulated, this leads me to wonder to what extent the centre is also directed against the state.

FS: Yes, when some young people say “we are not interested in the legal aspect”, they want to push the state to give more. The state, on the other hand, does not want to be excluded and wants to reinforce its status as the ‘leading moderniser’. This has always been the case in Morocco (and the Maghreb); for example, in the aftermath of independence of the countries of the Maghreb, the state presented itself as the moderniser and opened schools to all urban girls. Writing on these and related issues, I suggested an intellectual space I called ‘the Centre’.

The centre is a very flexible, shifting and not stagnant space of diverse voices that appeared in the aftermath of the Arab Spring. Some of the social initiatives by youth and activists co-created the centre and have succeeded in pushing the state to react. At the same time however, they are a leaderless movement so the state is no longer able to co-opt these initiatives and activists. They say for example that to really reform, we have to have pressure from both inside and outside. But then the state says, “No one can really dictate to the state what to do. We have our own Islam. We have our own family law.” It is fascinating what’s happening. It’s very different from what was happening when I was younger.

HK: To what extent can these developments observed in different countries of the Maghreb, despite their political, social and economic differences?

FS: Good question. There is something called Maghreb Egalité that was created by women feminists in 1995. Because we have strong feminist movements in the three countries of the Maghreb, they decided to unite across the borders. And that put pressure on their states. Historically, when we had the first reform in Morocco in 1993, we immediately had reforms in Tunisia and Algeria as well. The same happened in 2004/2005. Women’s movements in the Maghreb have historically succeeded in constituting a real pressure on their governments, pushing them to compete and outsmart each other in terms of women’s rights.

FS: As an intellectual trend, it feeds on what happens on the ground. It cannot stay in its ivory tower. But people from marginalised social classes don’t call it feminism. They call it life. Because feminism is an ideology which needs some kind of abstraction from reality. For sure, I am not the kind of person who would say, “Oh, we don’t need it.” It’s important to have it, because it opens reflections on gendered relations of power and it feeds on what happens on the ground.
Furthermore, what makes feminism interesting in our countries, is, among other things, the fact that men are increasingly involved in it as well. I keep saying this; men are and should be involved and do have a say there. Young men and older men, be they religious or not religious. So, as an observer you see all these voices there trying to speak from the vantage point without excluding the others – this is an essential component of what I call the Centre (26 March 2020).