Trapped women – a story of Poland’s war on personal freedom, safety and dignity

Trapped women – a story of Poland’s war on personal freedom, safety and dignity

“Rape has reportedly become a weapon in Ukraine. Finding justice may be difficult”,  by Laurel Wamsley, 30/04/2022, NPR.

„Women@PACE’ members strongly condemn the use of rape as a weapon of war in Ukraine”, 25/04/2022, Parliamentary Assembly, Council of Europe.

Eliza Rutynowska is a lawyer at the Civil Development Forum (FOR), an attorney-trainee at the Warsaw Bar Association and works on her PhD on engagement in neo-nazi groups understood as participation in organized crime under criminal law at the Warsaw University. She also acted as a pro-bono lawyer for peaceful protesters following the Women’s Strike protests in Poland and remains a published author of numerous op-eds on the issue of human rights. 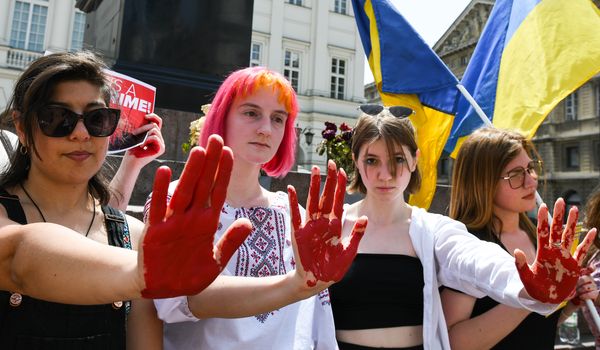 Two years since the fatal decision of the Polish Constitutional Tribunal was announced – “ridding” Polish women of one of the last three remaining possibilities to legally terminate an abortion – Poland receives the most Ukrainian war refugees in the world, including victims of rape as a means of war who got pregnant due to this crime. Prior to legal changes in 2021, women in Poland could have legally obtained an abortion if the pregnancy was a result of a crime, if the fetus was terminally ill or if the pregnancy could result in harm to the mother’s health or a threat to her life. Now, they are only able to obtain an abortion in cases where it is a result of a crime or a threat to the mother’s health or life.

Women’s rights are human rights – but not in Poland

With the world focusing on yet another attempt at limiting women’s freedom to choose whether or not they want to become mothers – referring to the recent decision of the U.S. Supreme Court’s to overturn Roe v. Wade and thereby abolishing the constitutional protection of abortion, triggering laws in 26 states und putting approximately 40 million women and girls at risk of unsafe pregnancies and dangerous abortions – many have forgotten the struggle of Polish women for their reproductive rights during the pandemic. In 2020, the Polish Constitutional Tribunal – currently considered by most lawyers to be largely politically-influenced – decided it was no longer constitutional for Polish women to end pregnancies if the fetus was severely damaged or terminally ill. It is currently legal to terminate solely in two instances – if the pregnancy constitutes a threat to the health or life of the pregnant woman or if it is a result of a crime.

However, this supposed legal reality also remains majorly theoretical. Practice has shown that since the Tribunal’s verdict there have been multiple instances where the overall chilling effect regarding medical professionals’ fear of prosecution came into play and rightfully available health services were denied. One of the more known cases was that of a young woman named Isabella from Pszczyna, a small town located in Southern Poland. She was hospitalized due to the drainage of the amniotic fluid in the 22 week of her pregnancy. Doctors waited with the removal of the fetus until its natural death within the womb. But this meant they waited too long for Isabella to live. She died on the way to the operating table. In the days following her passing, her sister-in-law recorded a conversation she had with one of the medics from Pszczyna, who confirmed that doctors are caught in a “legal limbo”, where they are simply afraid of terminating non-viable pregnancies due to the very real possibility of being accused of inducing an illegal abortion (Onet, 20/01/2022).

The state is out to get you

According to the Polish Criminal Code whoever terminates a pregnancy outside the possibilities admissible by the binding laws (apart from the pregnant woman herself), risks imprisonment of up to 3 years and from 6 months to 8 years if the fetus could have survived outside of the womb. This, however, is applicable only in circumstances where the woman consented to the procedure. If she did not or was otherwise coerced into it, the imprisonment may also be from 6 months to 8 years or from 1 to 10 years if the fetus was considered to have been able to survive outside of the womb.

Even though the pregnant women who undergo an abortion are themselves not criminally liable, all those who provide them with any aid whatsoever can be put on trial. Apart from the mentioned medical professionals, this includes family, partners, friends and everyone else like pro-choice activists if they help women to obtain abortion pills. Currently the penalty for delivering such help is up to three years in prison. This leaves women in unwanted pregnancies or with a terminal prenatal diagnosis all alone in their struggle for their safety, dignity, health and – quite often – their very lives.
In April of this year a certain criminal trial began – with the act of indictment focusing on a pro-choice activist named Justyna, who gave a desperate pregnant woman two abortion pills, that can be taken at home and that Justyna had kept for herself. The woman’s violent husband who stopped her from travelling abroad to obtain an abortion had informed police forces about the issue. After she returned home with the pills the police caught her. The pregnancy itself ended in a miscarriage due to the pregnant woman’s distress. Justyna is currently facing up to three years in prison (Radio Zet, 28/03/2022), and Amnesty International (see appeal below) – with the help of civil society – is trying to put pressure on the Polish authorities to let Justyna free.
Another aspect that has to be mentioned is the fact that the morning-after pill is also a prescription-med in Poland. Its status was changed soon after the 2015 elections won by the populistic right-wingers from the PiS party. Many doctors however choose to use their right to exercise the “conscience clause” which allows them to refuse the performance of a medical prescription contrary to their belief system. However, many lawyers question this because writing out a prescription for contraception by them is considered equal to performing the procedure itself.

This is the Gilead-style reality Ukrainian women are confronted with in Poland, often coming directly from war zones, traumatized and pregnant. Many of these pregnancies are the results of war rapes (NPR, 30/04/2022). These Ukrainian refugee women have three options. The first is leaving Poland for another EU country, where obtaining an abortion is legalized within a certain time period and not burdened by “conscience clauses” or fears of persecution. But there are other obstacles such as paying the costs of an abortion in a public hospital (i.e. in Austria 313 Euro) or in a private clinic (i.e. in Austria 500 to 800 Euro) or fears of losing the temporary protection status because of leaving Poland.
However, the good thing is that legal aid is being provided pro-bono by thousands of attorneys (see list below) and in theory, short term travels outside of Poland should not jeopardize their legal situation.

Ukrainian women who choose to terminate pregnancy in Poland can attempt to present their cases to a prosecutor, who holds the power to declare a pregnancy the result of a crime. In this case an abortion can be undertaken in a hospital. However, in practice in 2020 out of the 1,076 abortions performed in pre-Constitutional-Tribunal-verdict Poland 1,053 were considered terminal, 21 were seen a thread to the health and life of the pregnant woman and only 2 were performed due to the pregnancies being considered the result of a crime (biqdata, 3/11/2021). This means that even with criminal proceedings and possible proof available in Poland (witness testimonies etc.) these cases are very rare.
Another very rare option for an abortion is if the pregnancy is considered a detriment to psychological health. This is basically an attempt at squaring the circle with most fearing being engaged in legally-unclear procedures.
This is the cruel reality for Polish women and others who seek refuge here. It is an ongoing – albeit currently with them on the losing end – battle against the state. A battle for our health, dignity, safety – for our lives (27 June 2022).