Video von Veranstaltung "Food for All?"

C3-Radio Podcast "Food for All?" 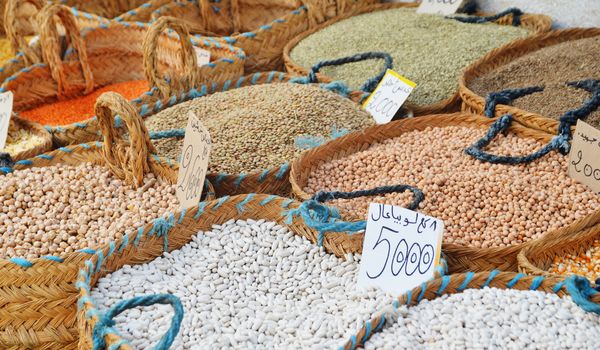 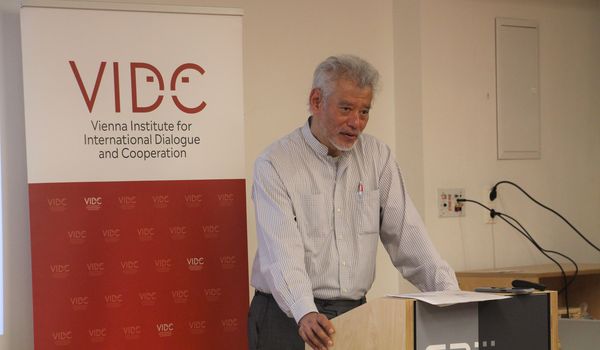 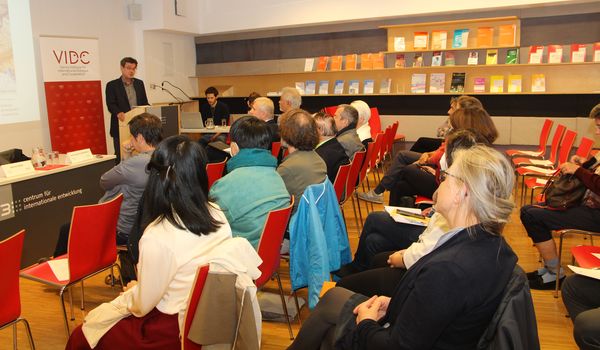 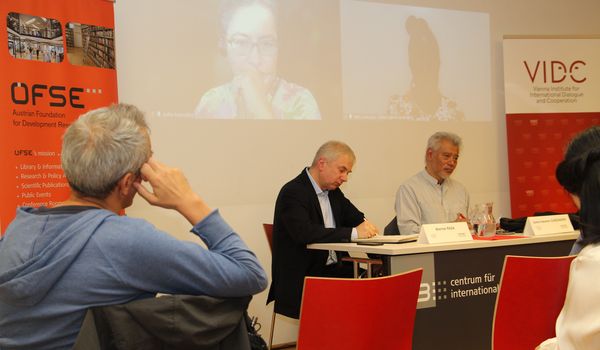 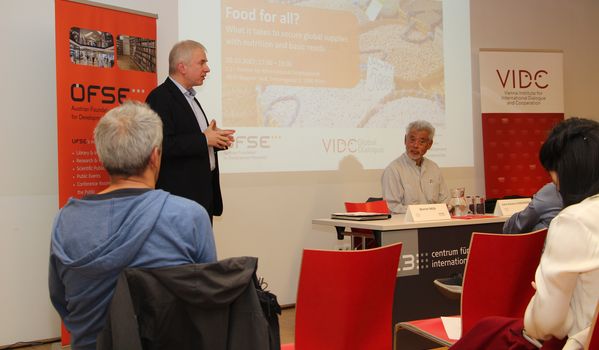 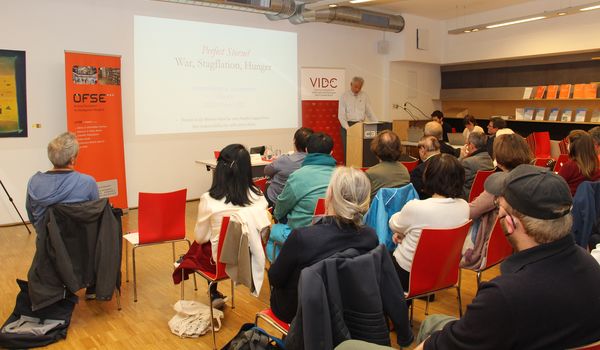 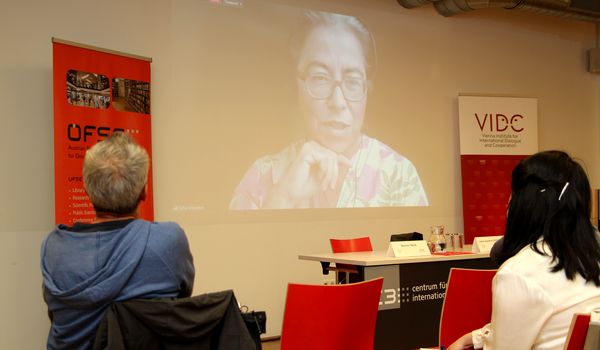 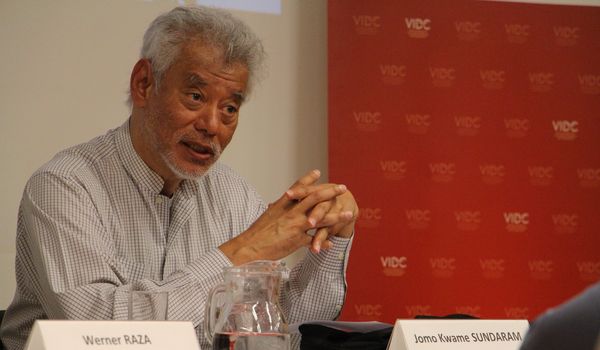 The Ukraine war triggered extreme price volatilities in global commodity and energy markets. But there are more and complex structural causes for the ongoing hunger crisis. Despite global food production tripling since 1960, many countries, especially those in the Global South, still struggle to retain enough resources to feed their people. Through a keynote address by Professor Jomo Kwame Sundaram of the Khazanah Research Institute and responses by Sofía Monsalve Suárez and Faith Lumonya, these experts will help us rethink the current political and economic structures that enable these issues to persist into the current age.

In his introduction Franz Schmidjell (VIDC) stated that today 830 million people suffer from hunger worldwide. “This number is not only much too high, but this number is a political scandal because we live in a world where there is enough food for all.” He referred to a VIDC conference in 2010 where international experts blamed the food speculation, unsustainable consumption patterns, land grabbing, the use of agricultural products for biofuels and climate change to the worldwide food crisis.

Werner Raza, the moderator and head of the Austrian Foundation for Development Research (ÖFSE) introduced the keynote speaker of the evening: Professor Jomo Kwame Sundaram of the Khazanah Research Institute.

The scope of hunger and malnutrition

Professor Sundaram begins his keynote address by stressing the importance of recognizing the true scope of the hunger issue. While the 830 million people figure used in the introduction is staggering, the definition of “hunger” is actually relatively narrow. People must be chronically hungry for a year to fit the UN’s definition, and the standard for “hungry” is measured by caloric intake, not nutrition. This definition of hunger does not include farmers that may eat many calories during the harvest but not the rest of the year. Additionally, farmers are often discouraged from growing food and encouraged to grow solely cash crops to gain a larger profit. This illustrates that the world food production network and distribution system is intrinsically ingrained with the financial structures that shape the world’s economy. “Why do women, for example, in India, prefer to have food crops rather than cash crops?” Sundaram questions, “Are they irrational?” Many communities in the Global South are abandoning nutrition and sustainable farming practices to produce a greater profit, influenced by capitalist trade and economic systems.

Malnutrition, or “hidden hunger,” is defined as a lack of micronutrients, minerals, vitamins, or trace elements in one’s food that can lead to diet-related, non-communicable diseases (NCD), or diseases that are not infectious and often caused by lifestyle or diet. Type 2 diabetes is an example of a diet-related NCD. Professor Sundaram has argued that more attention must be given to malnutrition. Sundaram references the work of Professor K. Srinath Reddy, the President of the Public Health Foundation in India. Typically, human development is thought of in terms of nature vs. nurture; however, Professor Reddy argues that nurture has the power to transform nature in development. “If a girl child especially is compromised because of poor nutrition, her ability to reproduce is impaired, but more importantly, the children she bears, will also suffer scars from her own impairment.” The nature of the mother has transformed the nurture of the other.

Over 722 million people were undernourished in 2020, while 2 billion suffered from micronutrient deficiencies. 45% of 6.9 million child deaths annually are linked to malnutrition. On the opposite end of the spectrum, 2.1 billion people are overweight—around 30% of the world’s population—and about 700 million adults are obese. Treatment of malnutrition and its related effects has a severe economic impact: around $2.0 trillion each year is spent treating just obesity. Malnutrition costs lives and money, and there is a need for appropriate policies and incentives to establish sustainable food systems and promote healthier diets and lifestyles. The right to healthy food and nutrition is a fundamental human right.

The role of government and the private sector

Global food systems have become increasingly privatized in an attempt to profit off food production within the global trade networks. For example, Professor Sundaram explained how the UN had recently partnered with the World Economic Forum to address a wide variety of topics, including food security. This is a concerning shift in tackling the issue of food security because the UN is an IGO partnering with a private business organization. Also, Professor Sundaram emphasized that it is essential to recognize that increasingly in the age of financialization, many government initiatives have become constrained due to the influence of the private sector. To prevent the current food insecurity crisis from escalating, he calls for governments to support food-importing countries, tackle commodity speculation, and enhance market and ownership transparency. Also, improving national and regional food reserves and food security response systems would prevent dependency on imported fertilizers and other resources.

Sofía Monsalve Suárez is the secretary general of FIAN International. She is also a member of the panel of experts on sustainable food systems and advocates for a different global food system. Suárez opened her commentary by introducing her advocacy for a different global food system: “We, as part of the food sovereignty movement, have a cautious take on the global food system.” Instead, Suárez argues for a food sovereignty system. The foundation of the food sovereignty movement depends on global food security strategies that allow for self-determination of what agriculture and food systems communities want. Right now, there is a global economic architecture that is exceptionally unjust and has concentrated too much wealth, as well as land, into too few hands. Small-scale farming is becoming extinct due to large corporations controlling food inputs, distribution systems, and retail. These large corporations have shaped the global food systems in a way that makes nations extremely dependent on global supply chains. Suárez also emphasized the role of the patriarchy in the global food network and how women are primarily responsible for farming and food production in many countries. These systems exploit women’s labor through their concern for putting food on the table for their families and caring for their children. Finally, Suárez emphasized the role of democracy in global food networks. Democratizing decision-making is one of the first steps in ending hunger since it gives people a voice to advocate for their well-being. Suárez concluded that we “need to address the global architecture in terms of debt and curbing commodity-market speculation and changing trade rules and creating space for food reserves at national, regional, and global levels.” Redistributing care work and strengthening women’s rights will also help alleviate the burden of agriculture.

Faith Lumonya is the head of the Economic Justice and Climate Action Program at Akina Mama wa Afrika in Uganda. She focuses on economic and climate justice issues while applying a gender analysis lens. Lumonya began by demonstrating that Africa has been disproportionately affected by disruptions in the global food supply network, such as many conflicts, multi-season droughts, floods, and economic crises. These disruptions play a prominent role in these African states since agriculture is the backbone of many of these economies. These disruptions interfere with people’s jobs and cause the cost of living to increase. However, similar to Suárez’s remarks regarding the globalized food network, Lumonya argues that present form of globalization is the underlying concern regarding these food production systems. “African food systems were traditionally designed in such a way that society produced food and shared food.” It was not made for large-scale production, contrary to the private sector’s beliefs. This global system is unsustainable for many African agricultural systems and farmers. If the diet of these communities were more diversified and not focused on limited cash crops, then this issue of malnutrition would not be as much of an issue. “When we were growing up, our plates did have an assortment of different foods, and our intention was to balance out the food nutrients provided for every meal”. Also, the collapse of cooperatives and the rural economic development systems in many African nations have resulted in a lack of regulation in the financialization of agriculture and an increase in trade and non-food investments. Lumonya concludes by encouraging a feminist approach to the issue of food insecurity, which emphasizes centering the needs of marginalized people in a nation or community. By adopting a more human-centered and egalitarian approach, food systems can provide for the needs of suffering people.

A pragmatic and relevant solution

In response to the commentaries by Suárez and Lumonya, Professor Sundaram reminded the audience that the issues we are trying to tackle are not in an ideal world that we would want; instead, we are trying to identify the nature of the problems in the world we live in right now. This particularly pertains to global food network trends in the globalization of the food supply chain and privatization of agriculture. In regards to Suárez’s concerns about the care economy and the burden of women within agriculture, Professor Sundaram reminds the audience that the field of agriculture has drastically changed, and many roles have been mechanized to prevent the back-breaking work many women have had to endure. In terms of Faith’s concerns about the nature of private corporations’ solutions, he reminds the audience that the people behind these initiatives are well-intentioned. These “solutions” that sometimes miss the mark are often because the options for solutions are defined by those who perceive and define the problem differently than the people actually experiencing it. However, genetic modification can still provide an adequate solution to some issues of malnutrition if the processes are natural and ween the dependency on fertilizer imports. Finally, Professor Sundaram warns that many innovations and developments, especially in this field, are only rewarded or acknowledged because of their potential commercial value. This view, which believes “the only kind of innovation which is to be valued is precisely because it has a market value,” is a dangerous one to follow in the field of agriculture, where it is an issue of life or death for many people. Due to outside influences, the focus of this issue is often skewed when in reality, the fundamental human right to food and nutrition should be the top priority when discussing global food production and distribution.