Hilda J. Twongyeirwe works with FEMRITE - Uganda Women Writers Association as Ex-ecutive Director. She is a published writer and editor of fiction and creative non-fiction. “No Time to Mourn. An anthology by South Sudanese women” (2020) is the latest book she has edited.

Fortunate Tusasirwe works with FEMRITE as Programmes Officer. She is a writer, especially of poetry and motivational content. 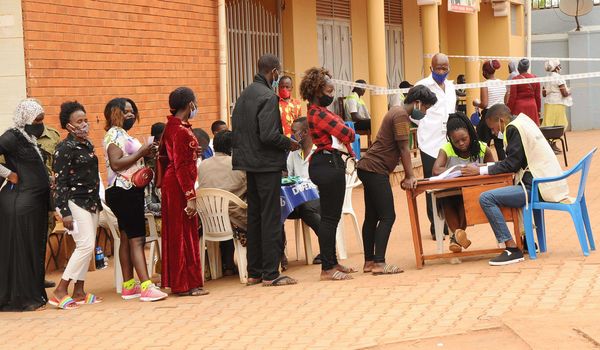 Uganda obtained independence from British Government in 1962. Before then, politics of the country were mainly controlled by aristocrats and colonial administrators. Pioneer women in Uganda’s politics and the women's liberation movement after independence were mainly from the aristocrat lineages.
In Uganda, participation of women in politics has always been a labored process bur-dened with patriarchal tendencies that relegate women to the margins. However, the National Resistance Movement which came to power in 1986, opened up a number of opportunities through Affirmative Action policies that have enabled more women to participate in politics – from grassroots to parliament.
Currently, the Speaker of Parliament is a female – Rebecca Alitwala Kadaga – who has served in the same position since May 2011. She is the first woman to be elected speaker. She occupies the third most important office in the country. Uganda was the first country in Africa to have a female Vice President – Specioza Naigaga Wandira Kazibwe – from 1994 to 2003. But does this not make Ugandan women jump with excitement? Probably not.

Women’s Participation in the 2021 General Elections

Women continue to suffer so many huddles in Ugandan politics due to different factors such as unequal access to education, poverty, care and domestic work, oppression and male dominancy, persistent gender stereotypes among others. In the just concluded parliamentary elections, one male contestant drew a pistol at a female contestant who was said to be leading in the race.

Currently, Uganda’s parliament has 529 members. It is a policy that out of the 529, 146 seats are reserved for women – one woman per district. More women can stand for the open seats and compete with men. The women are at least covered by policy but that may not necessarily result into effective representation. Sometimes women who come to parliament on the woman’s seat declare they are not representing women but all people. Per-haps this could be attributed to woman’s mental position of a general care-giver instead of strategic leadership.
The situation is not made any simpler by the Ugandan community which is highly religious and which quotes the Bible and Quran to justify leadership as a male phenomenon. Sylvia Tamale in her book “When Hens Begin to Crow” stresses that women politicians must resist male dominance and empower themselves in the face of patriarchy and underdevelopment. Women have to execute their political agendas within a historically entrenched male paradigm. The January 2021 elections, dubbed scientific, came with an even bigger challenge: the use of Information and Communications Technologies (ICTs) to campaign. More men than women are able to use ICTs competitively. It is no wonder therefore that only 20 women won open seats.
Several efforts are on course to support women through trainings, mentorship and capaci-ty building. Westminster Foundation for Democracy (WFD) in partnership with UN Women and Action for Development in Uganda organized a two-day online conference in July 2020 on the theme “Empowering women candidates to run successful campaigns ahead of the 2021 general elections”. The conference brought together over 150 political women candidates from different political parties, representatives of the electoral commis-sion and the civil society. It provided a platform to discuss opportunities and challenges for women in politics, best practices and tools to successfully conduct virtual political campaigns.

Ugandan Women and the Presidential Seat

Ugandan women have not been eying just Parliamentary and Local Council Seats but Presidency as well. In 2005, Mama Miria Obote, always described by her husband’s status – wife of the former president of Uganda, Dr. Milton Obote, stood for presidency as the flagbearer of the Uganda People’s Congress. She was the first woman to run for the top office in the country but could only get 0.6% of votes cast. In 2011, another woman, Betty Kamya, stood as leader of the Uganda Federal Alliance and got 0.66% votes, Faith Kyala followed in 2016 as an independent candidate with 0.43 votes. In 2021 Nancy Kalembe, a new voice, stood as an independent candidate. She was the only woman among the 11 presidential candidates and she got only 0.37% of votes cast. Despite the fact that Uganda has more registered female than male voters, none of these women has managed to dislodge gender stereotypes and injustices to win presidential elections. Do women stand any chance in the future? Maybe they do.

Women in Positions of Decision-Making

Many women in politics and other decision-making positions have contributed a lot to the wellbeing of other women and girls. They have led critical policy issues on family, educa-tion, health, among others. This goes back to 1961, when Sarah Ntiro as a young woman in Uganda’s Legislative Council (LEGCO), tabled a Private Member’s Bill on the registration of marriages, with the aim of protecting women and children in oppressive marriages. A Private Member’s Bill is where a Member of Parliament introduces a bill for discussion without it going through cabinet.
Outside policy and legislation, women in politics have championed critical initiatives that have lifted up women and girls at different levels. Janet Museveni, the first lady of Ugan-da and Minister of Education and Sports started the National Strategy for the Advance-ment of Rural Women in Uganda (NSARWU), an NGO which works with poor rural women to empower them economically through various interventions.

Winnie Byanyima who served 11 years in parliament and led the first Parliamentary Women’s Caucus which led to the founding of Forum for Women in Democracy (FOWODE) in 1995. FOWODE offers a platform for Ugandan women’s learning, networking, sharing experiences and advocating for equality and equity in decision making processes. FOWODE has put its focus on building a transformative leadership for women’s rights and influencing public policy. They have trained hundreds of women in political leadership and they have contributed a lot to the current number of women in elective politics.
The Speaker of Parliament, Hon. Kadaga, has led national campaigns on raising aware-ness on cervical and breast cancer and has been championing the fight against female genital mutilation. Hon. Matembe who was Minister of Ethics and Integrity and Member of Parliament says: “I am the commandant of women’s liberation; I will do what it takes to liberate women from misery, suffering, oppression, exploitation and all that.” There is need for more women to take up such a stance for the holistic advancement of the society. We cannot talk about realizing Sustainable Development Goals (SDGs) and National Plans, when one gender still considers itself superior to another.

Uganda might be the second country in Africa to get a female president. A few years ago, a crop of women leaders from across different sectors who had been organizing separately got together as Women4UG, a loose WhatsApp network. This started as a pressure group not only for sisterhood support but also to resist and counter males’ political dominance and the political humiliation that was being meted on women. This group sometimes takes the bull by the horns in political organizing. In 2016, they were the only group that stormed streets against lifting of presidential term limit. During 2021 elections they led a fundraising and sisterhood campaign to support fellow women especially in the parliamentary race. This was a non-partisan drive and indeed some of the women candidates supported won. This might be the starting point of forming a women’s block. Maybe in future it will translate into a block of votes too. Maybe it will be the block that will field a female candidate. Organizations like FEMRITE – Uganda Women Writers Association and others continue to document women’s political and other experiences in order to gather narratives crucial for future organizing (18 March 2021).