16. Dezember 2020
Ethiopia: When the guns roar, the voices of peace can hardly be heard

19. Mai 2020
Covid-19: The response of the African Union and the impact on the African European relations 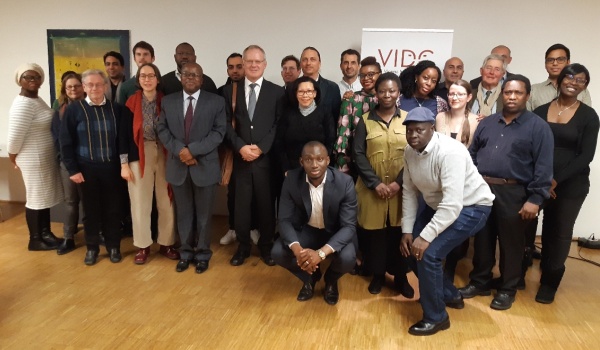 Franz Schmidjell (VIDC) welcomed participants and stated the objectives of the meeting: 1) to get a brief input on the history of African and European relations, 2) to be up-dated about current developments with regards to the Cotonou negotiations, the EU-AU summit in Brussels and the new African strategy of the EU and 3) to exchange about activities in Austria.

The moderator Rita Isiba stressed that 2020 be the chance of improvement of Africa Europe relations. She presented the Cotonou Partnership Agreement (CPA) and asks Mr. Lennkh for an historical overview in context of the upcoming Brussels summit.

Georg Lennkh stated that there were in fact more turning points in the past. After 1989, the end of the Cold War was followed by a wave of democratization on the African continent. Africa took over more responsibilities, e.g. for military missions: The first Africa Europe
summit took place in 2000 in Cairo. In 2007 the next summit took place where the African European Strategy (JAES) was agreed but it turned out that the implementation was more difficult than thought.  At the summit 2014 summit in Lisbon  it became clear that the ‘common values’  were no longer so common. In 2015 migration became the big issue and the special summit in La Valletta. The next regular EU AU summit took place in 2017 Abidjan with one focus on youth and employment.

Johnny Pitswane emphasizes that a new alliance in 2020 should mean a partnership of equals for the benefit for both since this was not the case historically. Things have changed, Today seven of the worldwide fastest-growing economies are in Africa and the launch of the African Continental Free Trade Area (AfCTA –see Africa Club Sep 2019) will give the internal trade another upturn. As a new priorities climate and environmental changes will be included. The African Peace Facility will remain crucial.

Andreas Melan mentioned that the Austrian plans follow the European plans. There is a need to reshape of the European strategy reflecting the changes in Africa.  The EU and AU Commissions will meet end of February, in May, there will a ministerial meeting of the
EU and AU held in Kigali.  The EU AU summit will be held in Brussels in October. Questions might be:  What kind of partner can Europe be for Africa and the other way round? What about climate change? If there is no equality yet, so how to get there? How to share responsibility?  Africa is four times in the new government program. A task force will established a ministerial level to develop a first draft for the strategy. There will be a dialogue with the parliament and the business sector as well as the civil society and diaspora.

Celine Fabrequette introduced ADYFE which is a network based on three pillars: Youth Entrepreneurship through bringing together Youth and African business and create synergies; Employability e.g. through job fairs and  Civic Engagement like for election. The participation of the youth is important. In 2017 in Abidjan there was an important youth forum beside the summit. Ten million Euros were allocated to six pilot projects of the EU AU youth agenda, 25.000 young people were able to participate in the Erasmus exchange program. One challenge is the question of communication: not enough people know about this program. Another challenge is the access to the allocated funds for the diaspora. The big gap between each summit is a problem because little happens in between.  For the 2020 events,  migration will remain a big topic although Charles Michaels focused during the Addis summit on climate change, digitalization and business opportunities. ADYFE ensures diaspora participation during the major EU/AU events and is a main coordinator of the EU AU Youth summit. Up to now this work is little or no remuneration.

The following round table discussion focused on following topics: