The European Union and China in Africa: Patterns of Agency

The European Union and China in Africa: Patterns of Agency

An interview with Lloyd G. Adu Amoah by Karin Fischer

Lloyd G. Adu Amoah is a Senior Lecturer at the Department of Political Science and Director of the Centre for Asian Studies at the University of Ghana. He is also the acting Director of the Centre for European Studies at the same university. Some of his research focuses on the impacts of information and knowledge on economic growth and social inclusion in Africa. He further works on Ghana-China relations with extensive research experience in China.

Karin Fischer is the head of the Global Sociology and Development Research Unit at the Institute of Sociology at Johannes Kepler University University, Linz, and is a VIDC consultant. 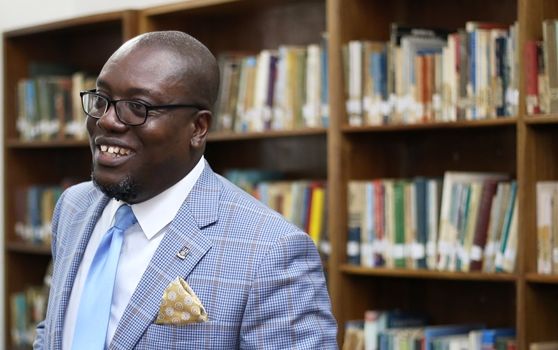 Africa is a site for competition between the European Union and China for economic influence and strategic leadership. Seen from an African perspective, Africa’s economic resources development has grown in importance for both the EU and China. How do you describe the attitude of the old and new superpowers towards Africa?

I would say that the interactions between the parties, that is, the EU, China and Africa, are quite complex. One of the useful ways to try to grasp what is going on is to look at patterns of agency, the ways in which the parties act consistently in pursuit of their interests. In the case of Europe, we are looking at centuries. The presence of China in Africa dates back to the last century. These two parties clearly are acting in ways that allow them to pursue their own economic and political interests. Usually, the tendency is to present a narrative which suggests that Africa has no agency at all. If we tie in the African part, you begin to see that indeed all of them have their own kind of agency.
When we look at the Chinese, I argue that we see what I call “material agency”. What are the Chinese trying to do? They have found out that the African continent provides them with natural resources. They are aware that there is a market they can take advantage of. Even more importantly they found out that if they present themselves as leaders of the global South or, better, of the so-called Third World, this attribution provides them with influence in the world. So Chinese hegemony is directed at material interests, but additionally they extract influence from the interaction with Africa that allows them to present themselves as a potential global power.

And what about the European Union? Can material agency may also be attributed to the Europeans?

The Europeans have been engaged in Africa over the last 500 years, so their hegemony has a particular tone and tenor. In my view, reading the history, the European interaction has tended to generate more, what I call, ideational or ideological hegemony. What Europe has tried to do, historically, was to construct Africa in its own image and to determine how the continent organizes its entire existence. We see this reflected in modern times, too. Within this ideational hegemony there are also economic interests. They also need markets, natural resources, etc.

You said that the dominant narrative is that Africa has no agency. How do you describe the position of Africa in this strategic economic playground?

What we find in the literature, at least for a very long time, is that Africa is obsequious, simply not assertive enough. It only exists by virtue of the existence of others. But this is changing. The view is beginning to emerge that Africa has the power to make decisions and act autonomously in pursuing its own interests in its interaction with China and Europe. This agency is actually exercised by the African élites and I characterize it as a morbid agency. The African élite’s decisions and actions seem conditioned by how best to exploit the European and the Chinese as they exploit Africa – but for their own interests. The élites have monetary interests and psychological interests. They try to take advantage of their relationship with the Chinese and the Europeans and aim at maximizing their own benefits. This hegemonic agency is morbid because it does not consider the African continent or countries and peoples in Africa and their collective well-being. For the most part, it is the local élites who benefit. In that sense, it is morbid.

You speak of a hegemonic morbid agency in Africa. But hegemony is always contested. Do you see any counter-movements that challenge the élite-driven morbid hegemony?

It is often said that we should look at counter-voices or counter-veiling forces against this morbidity; that we should look at interactions on the ground, on a micro level so to speak. In every country in Africa there are intellectuals, traders, businesses, small-scale producers, technicians and many others, and when they engage with Chinese and European actors, they try to pursue their own interests. So there is no monopoly, if you like, there is no monolithic understanding of hegemony. But I have a problem with that. I still think that the greater question is at the level of state to state interactions. They really make the difference in terms of policy, in terms of the political agenda, in terms of strategy.

Do you see any positive political attempts on a state level that aim to achieve a socially inclusive and sustainable development? Where do you see possibilities to achieve long-term strategies towards foreign interests?

I think there is a dawning realisation on the continent. For example, I got invited by the President of Ghana to work with a team to try and develop a China strategy in which we discuss the question of how the state can deal with all manner of Chinese interests. And we managed to put it together. So, there is a growing political realisation that something has to be done collectively, in ways that the élites who run the state reconnect with various sentiments in the African context and to try to present an intelligent common strategy.
But I think such rewarding initiatives are undermined by the kind of politics that we have on the African continent. I think, perhaps counter-intuitively, democratic processes have worked in strange ways to undermine policy continuity and institution building. This is because African politicians have become increasingly focused on winning elections instead of thinking through larger generational issues. Forging consensus among the political parties has become hard and once in power, policy is changed at a whim to score cheap political points. Thus, formulating and implementing visionary and long-term policies has become difficult.
For Western countries in particular, the democratic dividend, this idea that democracy of itself provides the answers to some of the most pressing, complex issues that the continent faces is taken for granted. But the constant change in who is running the state does not allow consistency to be embedded and therefore complicates the interactions with foreign actors, namely China and the European Union, at the geo-strategic level. And the political parties in Africa are not helping either because they have tended to become more electioneering machines than developmental constructs. This is the complication that we are facing when it comes to a common and positive agency towards external powers (11 December 2020).